Santana Live At US Festival

By DOUG COLLETTE
September 7, 2019
Sign in to view read count 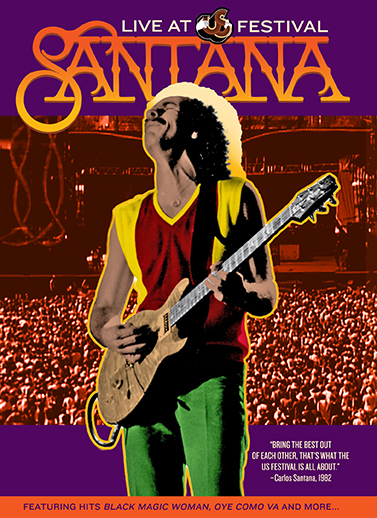 The Carlos Santana appearing at the US Festival in 1982 is not the same hungry street urchin transformed by the music he made early in his career with the band under his name. Since the galvanizing breakthrough at Woodstock in 1969, the group had changed with its leader, navigating through a jazz fusion landscape only to return, by this time over a decade later, to a more refined version of the Latin-influenced rock of Abraxas (Columbia, 1970) and Santana III (Columbia, 1971).

As little material from the aforementioned era of exploration appears here as in the personnel lineup. Guitarist John McLaughlin's "Marbles" is a cull from Devotion (Douglas Records, 1970)—tellingly coupled the Zombies' "She's Not There—while the namesake of the band is the sole holdover member. Vocalist/rhythm guitarist Alex Ligertwood is most distinctive contributor in this particular configuration, certainly the most memorable vocalist in a group of Carlos' since keyboardist Gregg Rolie from the original group (despite the former's similarity of voice to Steve Winwood). And while drummer Graham Lear may a dead ringer in physical appearance to his forebear Michael Shrieve, he plays in the same largely proforma fashion as the rest of this unit. Glenn Aveni's directing is similarly professional, but also lacking a certain provocative creativity.

Which is not all that surprising give much of the material herein is the generic likes of "Searching" and "Nowhere to Run." To be fair, such stock songs are interwoven with Santana classics such as "Black Magic Woman"/"Gypsy Queen" and "Oye Como Va," so the conception of this running order might build up some momentum into the concluding chant cum percussion piece "Shango." Unfortunately, a short snippet of interview footage with Santana appears between each number, a redundancy pure and simple since four such segments in their entirety appear as bonus features on the DVD. Better to splice together excerpts from those as a brief composite intro and/or outro to the approximately hour-long concert content.

Of course, if Carlos weren't so prosaic a speaker, such interludes might create some drama, but unfortunately that's not the case, except in that second instance where the man mentions Herbie Hancock: it's an intro to the latter keyboardist/composer's sit-in on grand piano for "Incident at Neshabur;" not surprisingly, this is the loosest of the eleven selections, featuring Santana's most lyrical guitar work plus teases of "My Favorite Things" as well as "Butterfly" from Thrust (Columbia, 1974), the syncopated likes of which Hancock had made his stock in trade roughly a decade prior to this second festival of Apple co-founder Steve Wozniak's.

While on the surface, Santana Live at US Festival might seem merely the Shout! Factory label's savvy move to capitalize on the high-profile release of Carlos' latest studio album, Africa Speaks (Concord Records, 2019)—especially given how the bumper graphics for each chapter echo that record's artwork (not the amateurish likes of this cover design)—it does represent a link with the guitar hero's recent tour wherein he concentrates on his most readily-recognizable early repertoire as heavily as here (perhaps more so).

This release thus reminds that, in direct succession to his most adventuresome work, Santana assumed a careerist direction long before Smooth (Arista, 1999) elevated his moniker to the level of a contemporary household name, not one relegated to the past. That sequence of events explains the guitarist/bandleader's involvement with this release as executive producer (and perhaps its dedication to his mentor, late rock impresario Bill Graham): it is distinctly of a piece with most of the rest of his discography.