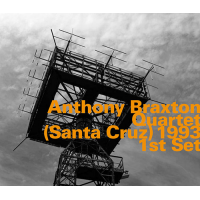 Decoding the music of Anthony Braxton might be a lifetime's mission. With his symbol system compositions and grand unification theories, even the trained ear admits to perplexity and a certain ignorance. Braxton has never stopped, nor slowed to explain himself to listeners. There are moments of insights though, in his performances. One can glean his approach when he covers jazz standards, plays the music of Charlie Parker or Lennie Tristano. Perhaps another window into the mind of the great one is listening to his celebrated quartet recordings.

Braxton's quartet with pianist Marilyn Crispell, bassist Mark Dresser, and drummer Gerry Hemingway performed together for nearly a decade. Each of his personnel would go on to be jazz luminaries, but in the cocoon of this quartet, Braxton took the format of the legendary John Coltrane Quartet and exploded it into a universe without boundaries.

(Santa Cruz) 1991 1st Set originally released in 1997 with both sets, is remastered and reissued here with just the first set of music. After this tour, Braxton decided the band had reached the zenith of its influence and disbanded. These Santa Cruz recordings are perhaps the finest documents of this band's existence.

Within the two lengthy tracks here, the quartet hints at Coltrane with a bluesy swing that appears towards the end of the last track. Crispell turns her keyboard into a serrated-edged note machine while Braxton liberates his alto saxophone. Elsewhere there are flashes and moments linking the music to his AACM roots. We hear him offering a soprano exploration one could mistake for the music of Roscoe Mitchell and in another section his horn is influenced by (or more likely one that influenced) the articulations of Evan Parker.

The beauty of this quartet is their cohesive transitions between Braxton compositions and improvisation. Hemingway displays an esp-like anticipation with each note and Dresser is a most solid foundation. Listeners need not grasp Stockhausen or Braxton's symbol systems to appreciate the dynamics at work here.