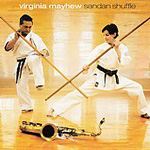 I had a chance to see Virginia Mayhew a few years ago in a sideman gig where she appeared as part of an all-femme quintet backing a singer. From memory, the other musicians were Allison Miller, Kendra Shank and Roberta Picket. My recollection of Mayhew's performance was that she was clearly the most pressing reason to be there. She displayed strong and melodic playing on tenor sax, plus a few numbers on soprano sax. There was nothing tentative about Mayhew's presentation; a sure-footed style cast her into a field of many better-known saxophonists. She also performed "Montererey Blues," a piece that's included on this album.

Virginia Mayhew's fifth album features a new group and a change of pace for the saxophonist. The cover photo and liners draw similarities between her training and discipline in karate and music. Mayhew is a third-level black belt (Sandan) and named the title composition to reflect this ("Sandan Shuffle"). Mayhew is a transplanted San Franciscan who has been active and living in New York since 1987 as both a leader and sideman.

Mayhew's quartet in a piano-less one, with guitarist Kenny Wessel, veteran bassist Harvie S and drummer Victor "Yahya" Jones. The songs and set list make a varied and interesting combination. While "Sandan Shuffle" has a quirky hard bop feel and fully establishes Mayhew's chops on tenor sax, the following Arlen/Kohler piece "Let's Fall In Love" is reinvented in an attractive calypso/cha cha mode (calling Sonny Rollins West Indian fans!) that I found to be irresistible. Kenny Wessel's guitar is right down the middle on these tracks, with good mainstream solos and comping. Mayhew picks up the soprano sax on "Spring Is Not Here" and the Sinatra-associated ballad "I Get Along Without You Very Well," and she has a delivery that wants to make you here more of it.

On "Jazz-like," Wessel adapts a harder edge (a la Rosenwinkel or Scofield) to match Mayhew's tenor sax. The group adapts the Thelonious Monk classic "In Walked Bud" into a post-Millennium funk groove, with Jones playing a backbeat. I can't be sure if this was meant to reflect an "In Hip-hopped Bud" vibe, but it's a questionable additon. Otherwise, "Tenderly," done as a mid-tempo blues, is anything but what the title suggests—the tune is well presented, but not appropriate to the song's lyrics.

All in all, Sandan Shuffle is stimulating and a pleasure to hear.