Polar Bear: Same As You 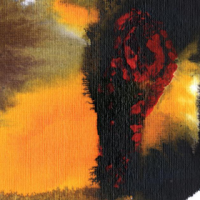 Geography is rarely something that a writer considers when preparing a review. But Same as You sounds profoundly shaped by where it was mixed and mastered—in the Mojave Desert, by producer Ken Barrientos and Polar Bear drummer and bandleader Sebastian Rochford. "We spent a couple days at his studio then headed out to the desert for five days to mix it," Rochford recalls.

Polar Bear's sixth release sounds wide open, dry and warm, quiet and loud, barren and vibrant, curious and mysterious. Because Rochford originally conceived and composed this music as a single, continuously flowing suite, then subsequently segmented it into six discrete movements, it's quite difficult to hear where one song ends and the next one begins.

Same as You opens with a prayer recited toward an unnamed creator ("Life, Love and Light"). Much of the following "We Feel the Echoes" is Rochford's flickering drum heartbeat, with double bassist Tom Herbert and tenor saxophonists Mark Lockheart and Pete Wareham tentatively stepping, but rarely diving, into Rochford's scattershot drumming and hovering electronics.

The drummer shifts to a tribal sound to sketch out "The First Steps" with harmonizing saxophones—dry in tone and abstract in approach—which build this melody up by collecting, repeating, and connecting small fragments into larger phrases that dissolve into electronics like the sun submerging into twilight. These electronics bridge into "Of Hi Lands," floating electronic ambience that eventually builds into a solid framework of both acoustic and electronic music—even the "live" saxophones seem ambient in these "Lands."

"Don't Let the Feeling Go" lifts this entire set's sound and vision thanks to vocals from Hannah Darling and Gar Robertson, who chant the title like an incantation, and additional tenor sax from Shabaka Hutchings, whose bobbing and weaving staccato notes counterpoint the drum and bass lines until longer saxophone lines eventually flow as if breaking through a restraining dam.

The set-ending "Unrelenting Unconditional" follows this same pattern except for twenty minutes instead of seven: It opens with Rochford's drums paddling at an almost imperceptible level of volume until the bass line swims alongside, and then saxophones slowly rise up from their rhythm like early morning mist. It takes ten minutes before the tenor saxophones seem to fully unravel and fly, but at least they eventually take off.

Brian Eno's ambient music and production techniques seem to permeate Same as You as much as any instrument recorded on it. It captures and presents a genuinely unique blend of acoustic and electronic jazz, often in high concepts and low volume.