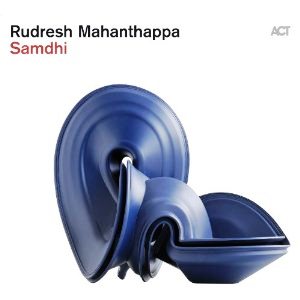 About halfway through the aptly named "Killer," it becomes apparent that saxophonist Rudresh Mahanthappa's Samdhi is up to something just a little different. Amid the track's impossible changes and blistering tempo, the saxophonist's alto undergoes acoustic-electric alterations that are processed through a laptop. Not that it was ever needed, but this embracing of technology, and other influences, adds yet another dimension to his repertoire.

Samdhi is the product of Mahanthappa's receiving a Guggenheim Fellowship in 2008, which allowed him to explore the fusion of electronic music, ancestral Indian music and jazz. It spawned a new group with a number of early dates and the results are striking. While slightly different from previous works, this release is an extension of his cutting edge, multicultural jazz that's been documented in recordings such as Kinsmen (Pi Recordings, 2008) and Apex (Pi Recordings, 2010), with saxophonist Bunky Green.

The release hearkens in some ways to the sounds of 1970s and 1980s—"blending," a label that was frequently used and abused, since jazz in itself is a blending of varied cultures and music . The sound does include elements of progressive rock and electronic instrumentation, but is also a singular identity as alluded to in the release's title. In Sanskrit, samdhi means "that which combines or unites" or "the interval between day and night."

This idea of unification lies at the heart of the project, as heard in David Gilmore 's solo guitar in "Rune," a precursor to the funky, rhythmic explosion in "Breakfastlunchanddinner," a jam that parties hard like Return to Forever. The tune contains not only Gilmore's hypersonic shreds but also the layered rhythms from drummer Damion Reid and Carnatic (South Indian) percussionist Anatha Krishnan, and a groovy Jaco Pastorius-like solo from strongman Richard Rabbit Brown on electric bass.

ADVERTISEMENT
"Parakram #2" is a sonic journey of undulating loops, pumped beats, and wild synthesized textures. The track's creative programming is exhaustive yet segues nicely into the flowing vibrations of "Ahhh," a tune whose tempo swells and quickens into a sublime groove where all the musicians shine. Another highlight is "Meeting of the Skins," a tour-de-force drumming exchange between Krishnan and Reid, each musician spurring the other to new heights.

From start to finish, the music never abandons its flavor. Stimulating, open-minded, and never pretentious, this is Mahanthappa's most accessible release to date.

Parakram #1; Killer; Richards Game; Playing with Stones; Rune; Breakfastlunchanddinnner; Parakram #2 Ahhh; Meeting Of The Skins; Still-Gas; For My Lady; For All The Ladies.