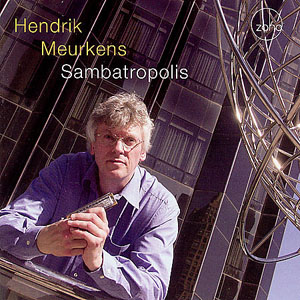 Playing the vibes and the harmonica is a rather unusual combination. Hendrik Meurkens was drawn to these instruments after he heard Lionel Hampton play the vibraphone on Benny Goodman's Live at Carnegie Hall (Columbia, 1938) and, a few years later, the harmonica of Toots Thielemans.

Even as he emerged as an adept player of these instruments, Meurkens was dipping into jazz, and particularly bebop. But he was also pursuing another tangent in Brazilian music. Meurkens has long been letting the two streams converge to give his compositions a particular scope and depth.

Meurkens varies the line-up of his bands to give his music more pith and character. He gets off on the right note assimilating swing on the heated "Sambatropolis." Jed Levy and Rodrigo Ursaia fire up the swing on their tenor saxophones, while letting a bop impulse add dimension and tensility. Meurkens brings his own vision to bear, swerving in and out of the melody with broad, facile strokes. Besides, his conversation with the sax men is decidedly topnotch.

The mood is quite different on the intimate "Ocean Lights." The ballad glows, given its soul by Meurkens on harmonica; however it wouldn't quite be the same without pianist Helio Alves, who is not only full of fluid ideas, but is also an empathic complement.

Antonio Carlos Jobim's "Voce Vai Ver" is another hallmark. The gentle strains of the bossa are dewdrops from the vibes; pretty yes, but also creating a splash and leaving an impress. "Choro Da Neve" spirals on the chorinho. The heady pulse is fanned by Meurkens on the harmonica with Adriano Santos driving the rhythm on the drums. Adding to the excitement are exhilarating contributions from Alves and Ursaia.

Meurkens has come up with a winning blend, once more.