By JOHN KELMAN
September 1, 2004
Sign in to view read count 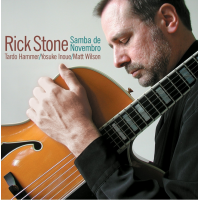 With so many guitarists out there mining the Jim Hall approach, it becomes challenging to find distinctive voices. Guitarist Rick Stone is certainly one to watch, but while establishing credibility on the New York scene he records infrequently, making it difficult to gain a foothold in the minds and ears of the listening public. Even more curious is the fact that his new release, Samba de Novembro , was recorded nearly four years ago and is only now seeing the light of day. It's a shame, because Stone is a player who does manage a personal style that is greater than the sum of its parts, someone who clearly looks back with reverence yet manages to feel contemporary, in a mainstream sort of way.

Stone's playing combines the economy of Hall with some of the soul of Wes Montgomery, a little of Pat Metheny's lyricism and a deeper, darker-hued tone that brings to mind Pat Martino but with an approach that is more sparing. The result of this blend is an all-encompassing sound that is still fully cognizant of the value of the spaces between the notes. His conception is mature and well-developed, bringing new meaning to well-heeled standards like "My Romance," where he starts with a solo that implies much without being an overstatement, before bassist Yosuke Inoue and drummer Matt Wilson enter for a treatment that swings lightly while Stone reiterates the theme in a way that highlights an uncanny ability to play almost contrapuntally.

While the majority of Samba de Novembro is a quartet date featuring Inoue, Wilson and pianist Tardo Hammer, Stone also appreciates the value of contrast. Kenny Werner's "Autumn in Three" is an empathic duet between Stone and Hammer, recalling Bill Evans' collaborations with Jim Hall. Thelonious Monk's "Played Twice" is a fun quartet romp that features a robust solo from Inoue, and some clever cross-pollination of other Monk phrases by Stone.

But as tasteful as Stone and the quartet treat standard material, the real meat of the programme comes with Stone's five originals. Each track dabbles with a convention—the title track, obviously, with the samba form, "Duck, Duck Blues" a minor blues that is surrounded by a more adventurous thematic figure, and "Blues Enough" a relaxed and swinging blues with a fleet-fingered head—but they all contain memorable melodies and variations that make them stand out as unique compositions. "Rain Forest" is richly lyrical yet with a set of changes that would challenge any player. And the closer, "In Loving Memory," is a poignant piece, another duet with Hammer that is steeped in reverence for things long past.

Spending more time as an educator and recording studio owner, Stone is an artist who, with a clear and consistent musical vision that pays homage without losing site of individuality, really ought to record more. He clearly deserves broader recognition, but is, sadly, less likely to achieve it unless he is more aggressive at getting his name out there more often.