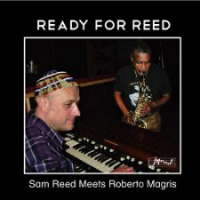 Italian pianist Roberto Magris has become the hard bop keeper-of-the- flame with recent J-Mood releases including Mating Call (2010), Morgan Rewind: A Tribute to Lee Morgan Vol. 1 (2012) and One Night in With Hope and More...Vol. 1 (2012), volume designations making clear there is more to come. On Sam Reed Meets Roberto Magris: Ready For Reed, Magris reintroduces Philadelphia saxophonist Sam Reed, who, after a lifetime in music, took some time off but was ultimately rediscovered.

What Reed gets in the bargain is late-life exposure like that enjoyed by alto saxophonists Art Pepper (1925- 1982) and Frank Morgan (1933-2007). Magris, for his part, extends his foray into hard bop with a bona fide veteran of the period. The union of the pair on Ready for Reed is not the standard "blowing session" of the 1950s, but instead a cogent and integrated paradigm of musical ideas expressed as such. This music does not have the hot New York City sound of period Jazz Messengers; it is more like the Philadelphia sound of Bobby Timmons and the Heath brothers, with whom Reed performed.

Out of the chute, Magris plays Hammond B3 on two songs, Gene Ammons "Jungle Strut" and the original blues, "Ready for Reed." Neither are Jimmy Smith greasefests, but they are funky to the toes. On "Jungle Strut," Reed shares saxophone duty with tenor saxophonist Steve Lambert. It is a nominal blues, propelled by a Caribbean cross-beat. Magris' title piece smells more of unfiltered Lucky Strikes and beer, but is still a pretty healthy affair, where Reed really show off his blues chops. On the remainder of the recording, Magris presents his contemporary and informed pianism, which acts as a spark for Reed to push beyond any limitations of health and age into that rarefied plane of creativity where all things are new.