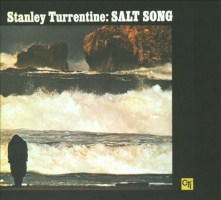 Stanley Turrentine's Sugar (CTI, 1970) has always stood out as the defining album in the tenor saxophonist's post-Blue Note discography, but that recording only marked the beginning of his beautiful relationship with Creed Taylor's CTI imprint. Turrentine's time with the label spanned the first half of the '70s and produced a few other winning albums that draped his thick, soulful sound in more modern aural fabrics of the times.

Salt Song (CTI, 1971) was his follow-up to Sugar and, while this album isn't cited as often as his sweet classic, the music ranks a close second when combing over his CTI output. While Don Sebesky seemed to do the lion's share of the arranging for the label, Taylor tapped Eumir Deodato for this date ,and it was the right move. Deodato helped provide the perfect backgrounds for Turrentine to deliver soul-stirring gospel music ("I Told Jesus"), bouncy Brazilian fare (Milton Nascimento's "Salt Song") and more, without resorting to the sort of gaudy instrumental dressings that brought the keyboardist-arranger some popularity with his own music, but rendered it dated and undesirable in the long run.

While Turrentine also delivers a ballad that beautifully evokes a cool ocean breeze ("I Haven't Got Anything Better To Do") and works through his own funky fare with glee ("Storm"), the clear highlight of this album comes right at the top of the running order. Salt Song's magnum opus is the ten-minute take on Freddie Hubbard's "Gibraltar," which is memorable for a variety of reasons. Turrentine's effortlessly soulful and melodic lines, a groove that's bolstered by bassist Ron Carter's tasty riffs and some funky drumming, seamless shifts in the feel of the song, and guitarist Eric Gale's tasty single-note lines that swim through this intoxicating number are just a few highlights worth mentioning.

While Salt Song will likely remain second-tier when compared to his label debut, this exciting album is an underappreciated gem and the logical next step for any Turrentine neophytes anxious to hear more of his post-Sugar output.

Gibraltar; I Told Jesus; Salt Song; I Haven't Got Anything Better To Do; Storm; Vera Cruz.