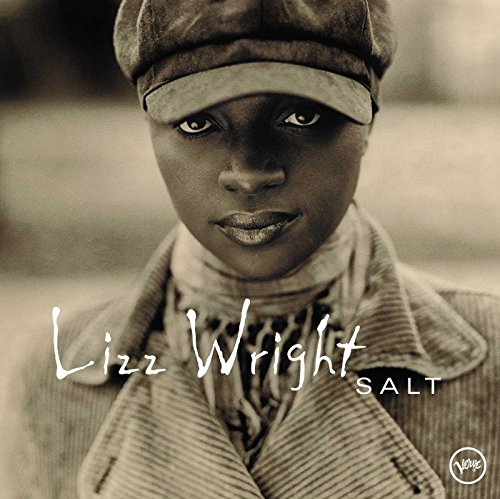 Please don't take Lizz Wright's song away. To do so would be blasphemous.

The 23-year-old vocalist from Hahira, Georgia has been singing in jazz clubs in Atlanta for a few years, eventually hooking up with the band In the Spirit. Last year she caused a stir when she performed at Billie Holiday tribute concerts in Chicago and Los Angeles. She now has an album under her belt, Salt, and it's an impressive debut. Wright's voice, which lurks in the contralto range, doesn't try to take the spotlight and belt out notes. Sometimes volume isn't necessary to feel emotion.

Kicking the album off with the upbeat Chick Corea/Neville Potter tune "Open Your Eyes, You Can Fly," Wright and the musicians jump all over the musical landscape. The title track takes on a 6/4 gospel feel with Kenny Banks doodling on the piano and Hammond B3 organ. Wright sings about how impossible it is to lose one's song or dance when it's been so engrained in one's life. "Just like the salt that's in the stew," she sings, "It's all a part of you / One thing that life can't do / It can't take your song from you"

The soulful spiritual "Walk with Me, Lord" starts off with an infectious bass groove before Wright and guitarist John Hart take a stroll with the Lord. Meanwhile, Wright creates heartfelt vocals for the wistful "Soon As I Get Home" from the Broadway hit "The Wiz." Mongo Santamaria and Oscar Brown Jr.'s "Afro Blue" starts off with a medium-slow bossa feel, then builds volume and picks up speed while pianist Danilo Perez solos. The album ends with "Silence," a folksy tune featuring Adam Rogers and Brian Blade (who also played drums on some songs and co-produced the album) playing acoustic guitars.

With Salt, Wright almost follows the path spearheaded by Norah Jones and her debut solo album Come Away with Me, playing mostly breezy songs that blend various genres. But unlike the Grammy-winning artist, Wright had a hand in writing a few more songs - in this case, "Salt," "Eternity," "Blue Rose," "Fire," and "Silence." Despite the section in the music store where you may have bought this album, Salt isn't technically a full-fledged jazz album. Maybe you could call it contemporary jazz. But it's hard to put this album into any category, because Wright drifts from pop to Broadway to gospel to Latin and jazz with ease.

And that's a good thing. No matter what genre it is, Wright pours her heart and soul into the twelve tracks on Salt. Hopefully, we'll be hearing a lot more from Wright in the years to come.

Reprinted with permission by The Villages Daily Sun in Lady Lake, Fla.

Open Your Eyes, You Can Fly; Salt; Afro Blue; Soon as I Get Home; Walk with Me, Lord; Eternity; Goodbye; Vocalise/End of the Line; Fire; Blue Rose; Lead the Way; Silence