By ELLIOTT SIMON
October 31, 2004
Sign in to view read count

I thought about the lines I knew

At the age of 12, pianist Sal Mosca was sitting on the curb on a hot summer day with some friends. He felt a cool breeze come at him and his next thought was that he wanted to take piano lessons. He acted on that impulse and began a journey that has thus far spanned seven decades. Along the way he has released influential solo and group recordings, had a recording label devoted to his music and played a major part in seminal sessions with altoists Lee Konitz and Warne Marsh. Most recently a concert at NYC's Birdland, that precedes an upcoming quartet release, has capped off an inspiring come back from a near fatal illness that has 77-year old Mosca playing better than ever.

Although he is the premiere protegé of pianist Lennie Tristano, it is an injustice to Mosca and his music to leave it at that. Listening to his recorded output, one is struck by his evolution and singular sound. Take for example Psalm, a 1997 duet with his student, tenor saxophonist Jimmy Halperin. A unique presentation of seven composed lines off of standard tunes, each is first presented "straight", separated by a free form interlude and then re-stated in more extended improvisations. The resultant holistic chamber feel is beautiful in its totality and intriguing for its compositional complexity. Mosca relates how the project came about: "Jimmy studied with me for 12 years and the last couple of years I told him to write lines on standard tunes...he brought them in for his lessons, they were beautiful but difficult as hell...it took 10 years for me to learn them a couple of weeks at a time...I made harmonic changes...slowed them down to bring out the beauty...he agreed and we improvised in time."

It is perhaps in Mosca's mentor/musician mindset and music first philosophy that one sees Tristano's influence most. This methodology has sax players, guitarists and vocalists, in addition to pianists, seeking him out to not only benefit from his creativity but to also gain from his overall approach. Pianist Billy Lester, himself a Mosca student turned leader/teacher, summed up his tutor's stature in no uncertain terms, "I met Sal in 1962 when I was 16 years old. I could tell you much. However let's just say that I feel that he is one of the deepest jazz pianists in history. He is a master of chordal improvisation, a master of time and a master of sincerity. As soon as I met him I felt I was with music for the sake of music, no airs, no pretensions, no desire to use music for fame or fortune."

In 1942, when both Mosca and fellow pianist Dick Hyman were 15 years old, they met at The Bucket, a former Mount Vernon, NY club that has been called the Minton's of Westchester County. Mosca recalls that he was impressed at how Hyman, even then, had Teddy Wilson's style down pat. Sal, however, was intrigued with Art Tatum, and it was that early infatuation that resulted in his seeking out Tristano. "A friend of mine was in Chicago and he heard what he thought was Art Tatum playing in the cellar, but it was a blind white guy named Lennie Tristano. I later was on a club date in Brooklyn and heard that he was studying with Lennie Tristano...I said can you give me his phone number...I called and got my first lesson...Lennie asked 'Why Me?' and I said I want to play like Art Tatum and he said 'I don't play like that anymore, I have my own style'...I learned technique, harmony, melody so I was able to copy Art Tatum myself." 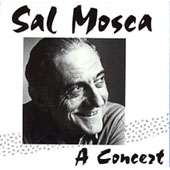 That same grounding in technique, harmony and melody has allowed Mosca to evolve and made for some of his best releases. Several of these are on Zinnia Records, a label true to Sal's musical philosophy and to those he has inspired. They include a two volume set of live performances with the Warne Marsh Quartet that feature intricate interplay between alto and piano and two solo recitals that run the gamut from the lovely mood inducing "Dusty Stars" to technically creative showcases like "Chromatic Boogie".

While Mosca played the old Birdland many times, he got his chance to debut music from his latest project at the club's current spot mid October. Entitled Thing-Ah-Majig and recorded three months ago, it again presents Mosca at the center of a quartet that this time includes Halperin, Don Messina (bass) and Bill Chattin (drums). Unable to play for several years due to health reasons, Mosca relates how Tristano helped him keep "sharp" during the enforced layoff, "I closed the piano and covered it with a cloth for two years. But in my mind I was always playing. I pictured my fingers at the keyboard in my mind. I learned that from Lennie who was blind...I thought about the lines I knew...I wasn't far away from it at all...and now I am...playing better than ever."

Visit Sal Mosca on the web at www.salmosca.com .