By JAMES PEARSE
November 17, 2012
Sign in to view read count 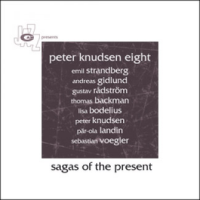 The members of the Peter Knudsen Eight, a dynamic and vibrant group of musicians led by Swedish pianist, composer and bandleader Peter Knudsen, have taken a bold step towards musical maturity with their first large ensemble recording, Sagas Of The Present. Themes as diverse as folk tales, rugged landscapes and the rich musical heritage of the Nordic region are all explored in the seven original compositions on this enjoyable recording.

Knudsen has been exploring the ever-decreasing space between jazz and classical music for some years with his trio and has composed and performed arrangements of both Debussy and Ravel. The trio's well-received Impressions-A Tribute to Debussy and Ravel (Found You Recordings, 2008) is the best example of this. For Sagas Of The Present, Knudsen not only draws on his classical music background but also enlists the contributions of some noteworthy figures in contemporary Swedish jazz, such as versatile trumpeter/flugelhornist Emil Strandberg, who brings with him a wide knowledge of diverse styles of music to the ensemble. The rest of the horn section features gifted saxophonists, clarinettists and flautists such as Andreas Gidlund (who leads his own quartet and, at one time, played alongside clarinetist Putte Wickman), Thomas Backman (also member of Swedish ensemble Paavo) and rising star Lisa Bodelius (recipient of the 2011 Faschings Vänner scholarship).

The album opens with the jaunty and spring-like "Kaleidoscope"— pleasant, yet rarely providing the mix of colors its title might suggest. The rhythms are fairly straightforward and the whole piece feels rather timid. An amiable clarinet lead brings to mind a family gathering or a theatrical setting rather than the explosive, youthful opening track of a debut recording. In contrast, the fascinating "The Emperor of Portugallia" is inspired by the novel of the same name by Nobel Laureate Selma Lagerlöf, published in 1914 and described as the "Swedish King Lear." It tells the story of a lonely farmer that slips into an imaginary world in which his estranged daughter has become a noble empress and he a great emperor. Weighing in at nearly 11 minutes, the powerful and soaring saxophones, combined with deliberate piano/bass parts, create a captivating musical interpretation of the father's ultimately sad story.

Sandwiched between the plodding and somewhat complex "Saga of the Gingerbread Castle" and "Aurora Borealis" comes "Nuked Present." Something of a highlight of the recording, "Nuked Present" is the first time the band members really sound like part of a jazz group and not a classical or library music ensemble. The horns are grouped into powerful pillars of sound and the rhythm section pulls everyone along nicely. Skillful and well-timed solos drop in and out of the harmony quite effortlessly and the piece comes together to form an extremely enjoyable piece of music.

Not easy listening and certainly not for dancing, Sagas Of The Present is an ambitious album for imaginative listeners.