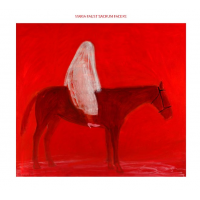 Estonian, Denmark-based composer and reeds player Maria Faust's latest project, Sacrum Facere, is a song cycle inspired by Estonian folklore and the runo singing from the Setu region, close to the Russian border. Faust composed and arranged the music for brass ensemble, three woodwinds, prepared piano, and Estonian folk harp, the kannel, in a manner that weaves impressively her two passions—contemporary classical composition and free improvisation.

The movements in the cycle were written specifically for an octet, each one featuring different soloist and all highlighting the individual voices of the musicians and their instrumental colors. Faust's compositions do not shy from sounding naive and even sentimental yet none of the compositions focus only on the straight emotional aspec, all emphasize her rich and highly personal musical language as composer and improviser.

On "Epp" she arranges the brass and woodwind instruments as a choir, led by Swedish trumpeter Tobias Wiklund, that charges the innocent theme with meditative colors. "Tui," featuring Norwegian tuba player Daniel Herskedal as soloists, and later "Vivre," featuring American tenor saxophonist Ned Ferm—Faust's partner—as the main soloist, offer more room for dramatic improvisation. Both allowing the ensemble to investigate sounds, dynamics and forms of interplay and emphasizes the unique role of the prepared piano and plucked strings of the kannel as sketching a delicate pulse.

Italian pianist Emanuele Maniscalco is the main soloist in the emotional suite "Lydia," cleverly weaving the loose outlines of this piece, ornamented freely by the brass and woodwind instruments. The profound ascetic and minimalist atmosphere of "Hiie," featuring Danish trombonist Mads Hyhne, and the title piece with Faust as the main soloist on the breathing clarinet and spare singing, brings to mind the spiritual-meditative compositions of fellow Estonian composer Arvo Part, informed too by East European folklore and religious singing. Faust concludes with an arrangement of a traditional piece, "Itk" (daughter's Lament), taken from an anthology of Estonian music and sung by Anna Vabrana (1877-1964), accompanied gently by the ensemble.