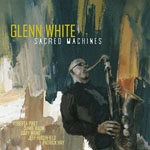 New York-based saxophonist Glenn White presents a set of eloquent and somewhat haunting tunes on Sacred Machines. The machines herein are a platform for the strong soloists in the ensemble, but the album's unity comes from a common palette that transcends the bandleader's harmonic tendencies (White wrote six of the disc's seven songs). Sacred Machines presents a pleasant interplay between able musicians, in a firm, stylistic environment.

Although there is a degree of variation between the tracks—"Triality" draws on funk riffs and organ work to give a rootsy, 1970s feel, while "Washington Heights" has moments of very tender balladry—the bulk of the album is devoted to a certain kind of play. White concentrates primarily on melodies that interweave independent sax lines and Jamie Baum's alto flute—a fascinating instrument that provides a sturdier timbre than the normal flute, while still giving an airy, honest sound.

Gary Wang and Jeff Hirshfield provide strong foundations on bass and drums respectively, but the thrust of the album is towards virtuosic soloing. Most often, the compositions settle into a hovering vamp over a simple progression, while one or more musicians invent a clouded yet compelling motif. Through it all, Wang and Hirshfield retain a responsibility to consistent, level playing.

ADVERTISEMENT
While the horns bob and weave over the melodies, these compositions are rooted in a sense of playful exploration, all within the parameters of White's harmonic language. The textures on Sacred Machines never get too wild or chaotic, but instead hold fast to a modern-sounding variant on modal harmony. The highlighted members of the band seem quite simpatico in this, with pianist Roberta Piket laying down some lovely solos (her accelerated section of "Washington Heights") while also furnishing a chordal vocabulary drawing heavily on Herbie Hancock's 1960s modal explorations. Additionally, on "Aftermath," the one track not penned by White, Baum composes a melody replete with harmonic strangeness, using contrary motion and clustered intervals between the horns. With these shared sensibilities and strong playing by everyone, Sacred Machines showcases a strong band in top form.