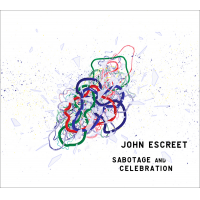 The music of composer and pianist John Escreet is a profound discovery. Each of his releases has been a revelation and an opportunity to scrutinize a major talent in the midst of his creative process. Not satisfied to work within 'the jazz tradition,' he assimilates multiple styles and musical models into his compositions. Drawing from 20th century classical, electronica, free jazz, and funk sensibilities, he sculpts a highly organized sound, often out of chaos.

The music on Sabotage and Celebration refutes the scientific theory that all systems decline into disorder or entropy. With Escreet, the opposite is true. From the seeming disorder of the title track's beginnings comes organization. Escreet moves through a crescendo of strings and introverted piano into a Sun Ra Arkestra-like free-for-all passage that resolves itself into an up-tempo jazz adaptation of club beats into a Coltrane-esque solo by Potter. Each transition seamless, and each musical style developed without being diluted. Same M.O. For "The Decapitator," his volatile trio composition that begins as an introverted dream machine that morphs into a muscle-bound percussive attack, Black matching Escreet's hammering Cecil Taylor notes. The joy here is the order and efficiency Escreet brings to his musical maelstrom. He can shift easily from mayhem to beauty. That exquisiteness is displayed on "Laura Angela" in which he switches to Fender Rhodes to match the refined guitar work of Adam Rogers and "Beyond Your Wildest Dreams," which veers from a pacific opening into a choral passage, then some chamber harpsichord and some modern momentum. Each piece is a gift of surprise and a curious examination into the organizing skills of a modern talented jazz composer.