Ryuichi Sakamoto at the Vic Theatre in Chicago 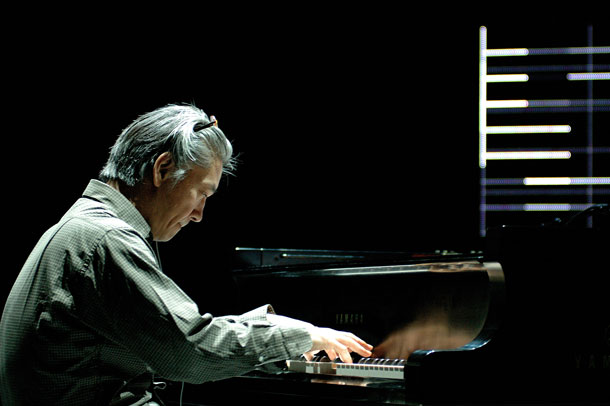 Mysticism and minimalism were the dual themes for the Ryuichi Sakamoto concert at the historic Vic Theatre in Chicago on Tuesday night the 26th of October 2010. Sakamoto stopped at this venue as a part of a rare North American tour to promote his dual CD set Playing the Piano/Out of Noise on the Decca Label.

The concert opened with ambient electronic and nature sounds played over a background of abstract, black and white art being projected on a large screen, that looked like overexposed negatives, enhanced by occasional puffs of smoke. Then Sakamoto started playing the piano strings first in a Zen like improvisation that ebbed and flowed in short cycles. After the first piece Sakamoto launched into solo piano interpretations of his own compositions for various film scores, maintaining the same minimalistic approach, but with limited improvisations, in front of a projected film of a desolate snow covered landscape viewed through a "dirty" car window. As his pieces became more mellifluous, color first purple and then red, started bleeding into the projected art.

He continued interpreting his cinematic themes, creating the atmosphere those pieces had done in their respective films without the help of an orchestra, he did, however, utilize a second grand piano that, thanks to Yamaha's computerized Disklavier system, looped previously recorded signals to his hand and feet movements, which as the introductory script explained, allowed Sakamoto to perform 'virtual duets' with himself. This technique further enhanced the ambience created by his repetitive yet complex musical ideas. The concert closed with Sakamoto playing the two grand pianos in this manner on three short, yet intensely melodic, pieces (including a Japanese blues) in front of first a flickering candle with the words of the Dalai Lama scrolling across it, then a red and white Mondrian style painting and lastly a black and white video of the insides of the grand piano.

Much heavier on atmosphere than substance, this concert nevertheless succeeded in creating an ethereal and welcoming sanctuary for weary minds.