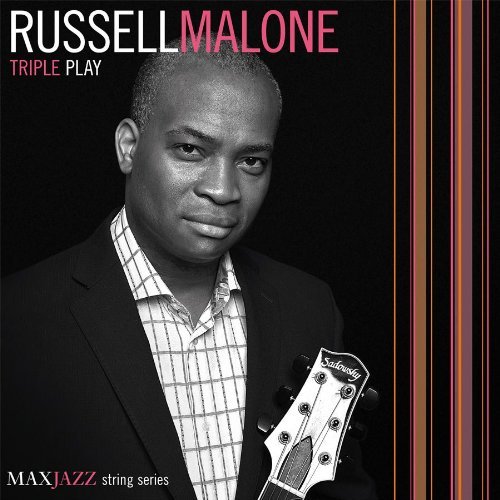 Guitarist Russell Malone returned to the Bistro, somewhat more exposed this time, his guitar in a trio with bass and drums. His companions for this visit were David Wong on acoustic bass and Darrell Green on drums. This session might be best described as an advance release celebration for his newest album Triple Play (MAXJAZZ, 2010) soon due to market. Pre-release copies were available for those attending. Richard McDonnell, founder of the St. Louis prominent jazz label, MAXJAZZ, was on hand for the opening.

Montez Coleman, a native of the St. Louis area, and holder of the drum chair on the new album was absent for this performance. Not a problem, the percussion seat was amply filled by Darrell Green, a youngster clearly appreciated by Malone. Wong has been to the club with his bass on prior occasions with other headliners. He is steady, mature, experienced and very capable. It's easy to hear why he was selected for the project.

The set seemed fresh for opening night, and was mostly drawn from selections on the new Malone release which includes a tune or two from his previous recordings.

The opener was "Honeybone," a Malone original. He followed with "Butch and Butch," composed by Oliver Nelson, a St. Louis native, known for having penned the standard "Stolen Moments," and for "The Blues and the Abstract Truth." The third tune, also from the Triple Play collection was "Pecan Pie" crafted by the guitarist himself.

The set included an up-tempo seasonal reading of "Witchcraft." Though uncommon for jazz audiences, another selection from the new recording was the ballad solo "Unchained Melody," which morphed into "More Than You Know," with the band joining. Malone does great justice to ballads. He discussed a bandstand lesson learned early in his career from an unnamed and seasoned female singer: "A ballad should be like like a kiss . . . sweet, deep and slow." These tasteful ballad treatments help distinguish Malone from many contemporary guitarists, including one of his mentors, George Benson, with whom he is often compared.

He continued from the new release with "Sweet Georgia Peach," a funk and blues original featuring a long drum solo by Green, who had no trouble filling the bill. The set closed with a spirited and energetic rendition of Duke Ellington's "Caravan."

Malone obviously enjoyed the venue, and the Bistro patrons. He commented favorably about both, as have others. With Malone, the Bistro faithful were treated to a full compliment of jazz guitar history ranging from Freddie Green four to the bar comping, to Wes Montgomery thumbed octave lines, to George Benson funk and pop, all in Malone's own blend, style and voice. It's easy to understand why he is often the first call for guitar on many contemporary dates.