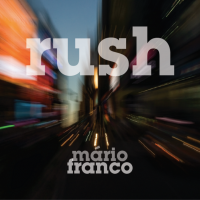 Portuguese bassist, composer and dancer Mario Franco, describes Rush as "a rock-inspired jazz album." It came, he says, from "an inner need of electric sounds."

Franco, born 1965, started out playing classical music before switching to jazz. He is a dancer with the National Ballet Company of Portugal.

His latest album is about how humanity wastes time while kidding itself that it uses it. "We are forever doing and forget just being," he says, "In a world where everything seems to rush past and there is no time for timelessness, we need moments to be still and to make peace with life. Photographs capture those moments. They are guardians of our memories."

Thus the album comes with 11 photographs, each one representing a song, precious moments from Franco's life.

The first one shows three children staring out to sea at a Portuguese resort. It describes the reality behind the first song, "Paralelos Cruzados (Crossed Parallels)." Franco describes this as being "about movement, energy and friendship, and the patterns they create in our lives." It's based on a simple musical phrase, repeated again and again to create an impression of timelessness.

"Pedregulho (Giant Stone)" pays homage to a large rock washed by the sea, which was obviously important to him as a child and which he now sees as representing ancient wisdom. The seaside theme continues with the lighter "Do Mar (From The Sea)," recalling holidays with his family as a child.

Entering adulthood, life becomes more complex. "Talvez Sim Talvez Não (Maybe, Maybe Not)" is about "decisions, choices in life." It is represented by a staged picture of two peacocks facing away from each other.

At the other end of the scale, a skyscape of clouds titled "Kind Of High" is dedicated to the memory of Jimi Hendrix.

The closest Franco comes to making a political statement is "Aftermath of War." The photograph for this shows a ruined house in which he imagines someone sitting alone, sadly playing the piano.

The picture for "Dia de Merda (The Shittiest Day)" is a blurred cityscape snapped from inside a moving car. This is a cry of rage against "crazy drivers rushing to be at work on time, traffic jams, selfishness and envy."

As you may have gathered, Rush can be a mite puritanical and po-faced at times, while at others it wanders from its subject matter. Musically, there are a few too many repetitive arpeggios. But Franco's sincerity shines through.