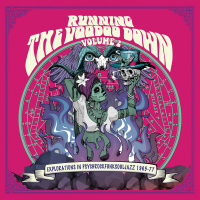 A raft of scholarly theories can be put forward to explain the affinities linking the genres represented on this compilation, subtitled Explorations In Psychrockfunksouljazz 1965-77. But there is a simple explanation: grass and acid, the lingua franca of the era's counterculture. True, there is only circumstantial evidence to suggest that John Coltrane and Joe Zawinul, both featured on the album, used either substance. But if they did not, a large proportion of their audience certainly did. As for the other featured musicians, most are known to have spent much of the late 1960s and 1970s righteously socked out. The title of the Shuggie Otis track, "Aht Uh Mi Head," says it all.

The first volume of Running The Voodoo Down focused on funk and p-funk. The second disc has a wider ambit which includes more down-the-line jazz content, from Coltrane, Zawinul, Sonny Sharrock, Sarah Webster Fabio and Bob Thiele Emergency. It also digs deeper, and some listeners—even those who were tuned in back in the day—are sure to find one or two items which are new to them.

The album opens with the earliest and best known track, "Acknowledgement" from Coltrane's A Love Supreme (Impulse!, 1965). Do we really need to hear it again here? Maybe not, but it sets the scene. Roger McGuinn, guitarist with the Byrds, whose "Eight Miles High" follows "Acknowledgement," is on record as saying he listened to A Love Supreme "obsessively" in 1965.

Most of the musicians featured on Running The Voodoo Down Volume 2 are likely to have been influenced by Coltrane's album. So it is fitting that the final two tracks are "Together To The Tune Of Coltrane's Equinox" by poet and singer Sarah Webster Fabio, from her eponymous 1977 Folkways album, and "Lament For John Coltrane" by Coltrane's longtime producer, Bob Thiele's studio project Emergency. Played by flautist Joe Farrell, bassist Wilbur Little and drummer Elvin Jones, the track has been edited down from a much longer version on the Emergency's Head Start (Flying Dutchman, 1969), but it still works, even in this foreshortened form.

The "where has it been all my life" track for this writer is "To The Establishment" by singer Lou Bond, from his only album, Lou Bond, released in 1974 on Stax subsidiary We Produce Records. At over eleven minutes the longest track here, it has well-observed social-commentary lyrics, great horn charts played by the Horns Of South Memphis, and to-die-for strings orchestrated by Stax session pianist Lester Snell. Bond's vocal style is a blend of Tim Buckley circa Sefronia (Discreet, 1973) and Curtis Mayfield, which pretty neatly sums up the rainbow world which produced the music on Running The Voodoo Down Volume 2.

A stone delight from start to finish.

A Love Supreme Pt. 1 Acknowledgement; 8 Miles High; Starship; In A Silent Way; Aht Uh Mi Head; Sweetback’s Theme; Black Woman; Life And Death In G & A Part 2; Ungena Za Ulimwengu (Unite The World); Zu Zu Mamou; Jimi’s Guitar Raps With The Bass; To The Establishment; Do Your Thing; Together To The Tune Of Coltrane’s Equinox; Lament For John Coltrane.