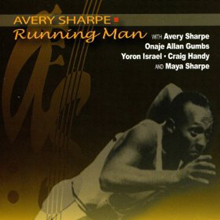 Avery Sharpe has an extensive history as a bandleader, a composer and a first-call bassist with musicians such as Yusef Lateef, and Pat Metheny. He was also McCoy Tyner's bassist for almost 20 years. No surprise, then, that Running Man is a rhythmically strong album of straight-ahead jazz tunes.

The bassist's compositions move from funky, upbeat, tunes to gently lyrical ballads. Craig Handy's saxophone playing is key to the changing moods. "Running Man," dedicated to athlete Jesse Owens, has the pace that's to be expected of such a tune. Sharpe's electric bass playing matches Handy's soprano sax note-for-note, while longtime collaborator Onaje Allan Gumbs' piano is sprightly, with a rolling left-hand pattern that adds to the feeling of movement. Sharpe plays a beautiful Roth double-bass, built in 1935, on most of the tunes but he is also a dexterous 6-string electric bassist. On "Ancestry Delight," his work at the top of that instrument's range has a fluid, lead guitar feel.

Sharpe shares writing duties with his band mates, each of whom compose a tune. Handy's "Lexi's Song" is a beautiful mid-tempo composition driven by a gentle shuffle from drummer Yoron Israel, whose own "Her All" is a lilting ballad, with Handy delivering the strong melody on tenor sax. Gumbs' "Jump!" is an upbeat number that gives the pianist a chance to stretch out with a percussive solo.

Sharpe's daughter Maya adds a wordless vocal to "Silent War," an unusual tune with a sense of longing that's accentuated by Maya's voice and Sharpe's arco bass solo. She also sings her own lyric to Sharpe's "Breathe Again," the prettiest number here. She has a light, country-tinged, voice with an attractive fragility to it: her voice and Handy's soprano sax form an affecting combination. While Running Man is an attractive collection, it's "Breathe Again" that stands out and suggests a fruitful partnership for the future.