By BRUCE LINDSAY
September 18, 2013
Sign in to view read count 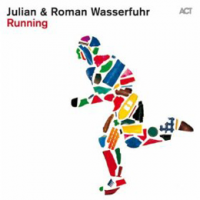 Four albums into their careers and the Wasserfuhr brothers—trumpeter Julian and pianist Roman—are still in their 20s. Running showcases their signature sound, unhurried and strong on atmosphere, as befits a pair of musicians whose first album, Remember Chet (ACT Music, 2006) paid homage to Chet Baker. It also sees them working with a new and sympathetic rhythm section, exploring the use of a string duo and featuring the work of their father, clarinetist Gerald Wasserfuhr.

In keeping with the brothers' love of Baker, the opening bars of "Weary Journey" have distinct echoes of "My Funny Valentine." As a whole, "Weary Journey" sets the tone for much of Running—cool, calm and considered playing, slow-to-medium tempos and spacious instrumentation. "Rocholz-Korosak" bucks this trend to some extent—a bit faster, even approaching funkiness thanks to Oliver Rehmann's drums.

The album's two cover tunes serve to highlight the qualities of the brothers' approach. Pete Townshend's "Behind Blue Eyes" and Lennon and McCartney's "Nowhere Man" are genuine rock classics, given a fresh feel by the brothers' perspective. Julian's trumpet takes the vocal melody on "Behind Blue Eyes," his horn and the string section combining to emphasise the song's plaintiveness but without the underlying anger Townshend and Roger Daltrey created in the original. "Nowhere Man" opens with Roman's lovely but brief solo piano. The band takes the song at a much slower pace than did the Beatles, the song's inherent sadness—easy to miss on the Beatles' rather cheerily up-tempo arrangement—made more obvious by Benjamin Garcia Alonso's languid bass solo.

Two more original compositions point to a possible future direction for the brothers. The slinky, swinging "Go On" and the slow ballad "See You Again" feature lyrics by Israeli pianist Itai Sobol and vocals from David Rynkowski. The singer has an engaging voice, smoothly romantic and soulful. The songs sit neatly alongside the instrumentals but Rynkowski adds a new tonal quality and broadens the music's emotional range. "Go On" is underpinned by Rehmann and Alonso's seductive rhythm. "See You Again" is for the most part a duet between Rynkowski and Roman, Julian contributing a spare but telling trumpet to the latter part of the song.