Mariel Austin: Runner in the Rain 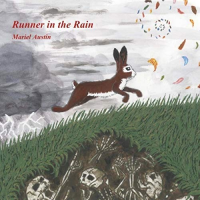 Young trombonist / vocalist Mariel Austin, who quadruples as composer / arranger on her debut album, Runner in the Rain, writes music that is hard to pigeonhole, at least as it relates to jazz. Some of her compositions are thematic, some experimental, some have classical overtones, some even swing on occasion, and most are technically demanding. As for improvisation, it plays a subordinate role more often than not, with some digressions to be noted later.

Austin, whose early influences included Charles Mingus and George Russell, earned a master's degree in jazz composition in 2015 at the New England Conservatory of Music, and has stocked her big band with friends and colleagues from the NEC and Boston's esteemed Berklee College of Music. Mastering Austin's elaborate and at times turgid charts is no easy task, even for them, but they acquit themselves well on each of the five selections on what is labeled an EP (in other words, the playing time is roughly forty minutes). Austin composed every number save Wayne Shorter's seductive "Night Dreamer" and arranged them all.

Speaking of "Night Dreamer," that is one instance wherein solos are conspicuous, with tenor saxophonist Noah Preminger and (to a lesser extent) vibraphonist Andria Nicodemou and pianist James Fernando raising a stout framework within Austin's lustrous arrangement. Another is the ballad "One-Way Journey Home," on which Austin carries the melody and solos capably on trombone, as does Vaughn Stoffey on guitar. That leads to "Runner in the Rain," an earnest albeit melancholy theme on which Austin fares rather less well as a vocalist. Granted, she is not well-recorded; even so, the voice is more strident than pleasing, the lyric cryptic at best, subverting whatever homage Austin had in mind (the song was written first as an experiment in electronic music, then rearranged for a large acoustic ensemble in honor of a friend who passed away).

The pretentiously named opener, "A Rough, Unsorted Compiling of Ways Not to Exist," is thematic, with each "section" representing a different state of mind, from frustration and uncertainty to brooding, liberating anger, reflection and movement forward. The introductory passage, punctuated by bass, drums and trumpet, leads to a more introspective theme (brooding?) before the band enters to assert its "anger." Drums and brass then intermingle for a conclusive outburst of frustration and anxiety. "Mirror Shift," a rhythmic, brass-driven mosaic written for and previously performed by the New York Youth Symphony, completes the program.

On the plus side, there's no doubt that Austin is a talented musician who knows how to write for a big band. On the other hand, the music she produces (at least in this case) may ensnare the mind but is unlikely in most circumstances to quicken the heart. Further experience will more than likely narrow the gap.

A Rough, Unsorted Compiling of Ways Not to Exist; Night Dreamer; Mirrorshift; One-way Journey Home; Runner in the Rain.