By JAKOB BAEKGAARD
August 27, 2018
Sign in to view read count 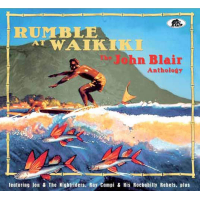 There's something fundamentally life-affirming about surf music. Maybe it has something to do with the images the music conjures: swaying palms, hot sunshine, warm sand and blue waves. It's not a coincidence that the recordings sometimes include sounds of weather: piping wind and splashing waves. Surf music is mood music, occasionally used in films, but it also has the attraction and zest of rock 'n' roll. There's an immediate energy and enthusiasm present in the music. Much of this has to do with the magic of the guitar riff. Surf music is essentially the dream of elaborating on a cool riff just to let it flow like a surfer catches a wave. In that way, many budding guitarists have fallen in love with the sounds of surf guitar because it speaks to the desire for a great riff. To a beginner, chords are good, but riffs are better!

While many guitarists eventually forget the attraction of the riff and move on to complicated chord progressions and standard song writing, others stick to their love. This is the case with the living surf guitar sage, John Blair, whose musical story is told on the double disc Rumble at Waikiki. The John Blair Anthology. Blair is not only a part of surf music history. He has literally helped writing it as a scholar and guitarist instrumental in the second breakthrough of surf music in the 1980s. Blair wrote a close to definitive discography of the golden age of surf music: The Illustrated Discography of Surf Music 1961-1965. He also helped compile the essential survey of the genre Cowabunga! -The Surf Box (Rhino, 1996). However, it was as a musician with Jon & The Nightriders that he entered the canon of surf music himself.

Before moving on to the main course, a healthy helping of Jon & The Nightriders tracks, the anthology begins with a bluegrass-piece. Blair's first record was not with a surf guitar group, but with the bluegrass constellation The Procks, Gerald & Elnora. The track "Ole Slew Foot" in fact has all the joy of surf music, but electric guitar reverb is replaced by blinking banjo. Blair would also play and record with rockabilly-singer Ray Campi and the tight high wire-guitar heard on three tracks is a good preparation for the Jon & The Nightriders tracks. The anthology also includes Blair's other groups and side-projects. The most revealing is the previously unreleased treasure trove of tracks with fellow guitarist Marty Tippins. Besides covering rock 'n' roll group the Fireballs, the duo included an eclectic range of sounds as Blair reveals in the excellent self-penned liner notes:

Besides the Fireballs' covers, there were other tracks that reflected our different musical backgrounds and influences. The choices ranged from the exotic and moody "Adventures in Paradise" to a rousing, near bluegrass-arrangement of The Ventures' "Gandy Dancer" and acoustic guitar arrangements of original compositions recorded by earlier surf bands. The sound of the production varies from the use of only two guitars and bass to multiple overdubs involving different stringed instruments and light percussion.

In a way, the Blair & Tippins tracks sum up Blair's whole career with elements of bluegrass, surf, exotica and rock 'n' roll. The thing that shines through in all the music is the joy of playing and this is also something that is characteristic of surf music in general. Hearing this music is pure pleasure, especially as it is presented with variety in musical texture and twang and a hefty booklet (64 pages) that also includes a detailed discography. With a release like this there is no excuse not to ride the wave and rediscover the joy of the riff.