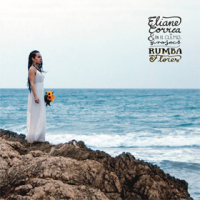 Short—at just 32 minutes and eight tracks—and straight to the point, Rumba Con Flores is an assured debut from Eliane Correa. The young keyboardist, composer and arranger recorded the album in Havana and London over a three year period (then mixed and mastered it in Madrid), working with a fine array of musicians who prove themselves to be truly in sympathy with her musical ideas.

Correa wrote and arranged all of the songs as well as playing piano, keyboards and synths and adding backing vocals. She's joined by around 30 other musicians, but only drummer Michel Castellanos, trumpeter Graeme Flowers and alto saxophonist Roberto Manzin contribute to more than four tracks. Most players, especially the many percussionists, join in on just one or two numbers.

The result of this wide range of players and singers is a richly diverse set, each song with its own distinct flavor even if Cuban rhythms are at the album's heart. Correa's arrangements make the most of the instrumental mix, especially on songs such as "Rumba Con Flores" that feature Flowers and Manzin. "Tengo Una Piedra En El Bolsillo" combines Flowers' fiery, attacking, solo with the album's tenderest vocal. "Flying Colours" is also a striking song: Josué Borges' flute and Yaisel Puerto Garcia's cello craft contrasting instrumental moods over Binisa Bonner and Yanaysa Prieto's distinctive vocal pairing.

"Cáscaras" once again features Prieto along with the members of Osain del Monte—Jorge Iván Martín on tres, plus percussionists Adonis Panter Calderón, Barbaro Yordanis Crespo Richard and Ramón Tamayo Martínez. The gentle, relaxing song brings this often high energy debut to a calm and romantic close and shows yet another side to Correa's talents. Rumba Con Flores is, one hopes, just the opening chapter in this exciting young talent's discography.