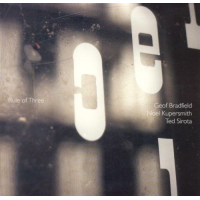 Just in time for summer comes the first "feel good" record of the year. We don’t mean feel good as in soft cheese; we are talking solid accessible post bop trio music here.

Ted Sirota, the drummer and leader of the Rebel Souls, has pared down his lineup from the sprawling sextet to this spartan trio. The Chicago-based drummer began in Boston, playing with rising-star guitarist Jeff Parker and soon adding the Chicago Underground musicians Rob Mazurek and Noel Kupersmith to his lineup. As members got busier with other projects, Sirota added saxophonist Geof Bradfield and recorded this very well rehearsed trio.

The pure satisfaction of this recording is the attractive saxophone sounds of Bradfield. Little known outside Chicago, he is steeped in the tenor tradition of Coleman Hawkins, Gene Ammons, and Sonny Rollins. While I have dropped those hall-of-fame names, he also addresses the Sun Ra sideman on the tribute track “John Gilmore” and soprano legend Steve Lacy with “Koan.” One can continue to assess influences throughout. There’s a bit of Charlie Rouse, some Ben Webster, and well, we could go at this endlessly. Needless to say, Bradfield has the canon down.

Sirota plays with a fiery touch. He has a bit of Philly Jo Jones in him and he keeps things loose. Like his previous outings, Sirota has an ear for the avant-garde but keeps things from spinning too far out. Kupersmith, a solid anchor to any project, maintains the hip-retro cool throughout.

An admirable effort, certainly one to keep coming back to this summer.