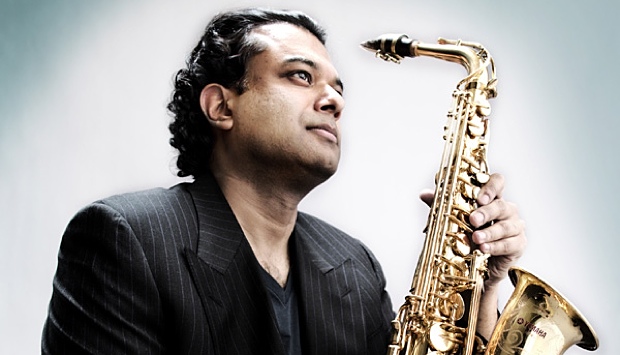 By ANIL PRASAD
May 2, 2011
Sign in to view read count
Rudresh Mahanthappa is a man on a mission. He's driven to integrate the saxophone into a vast panorama of settings far beyond its typical range. His output is often reflective of his Indian-American heritage, with an engaging hybrid approach that merges avant-jazz and South Asian elements. His current quartet, also consisting of microtonal guitarist David Fiuczynski, bassist Francois Moutin and drummer Dan Weiss, is emblematic of that direction.

In addition to his own band, Mahanthappa leads or co-leads several other groups that push the boundaries of jazz. For almost two decades, he's worked with pianist Vijay Iyer and they currently tour as a duo known as Raw Materials. Indo-Pak Coalition, featuring guitarist Rez Abbasi and Dan Weiss, is another key project. Mahanthappa also works with Carnatic saxophonist Kadri Gopalnath in Kinsmen. The act explores the intersections between Indian and Western improvisatory approaches, with Mahanthappa taking on a jazz-oriented role, while Gopalnath represents the South Indian side of the equation. Mahanthappa is also one third of MSG, a mercurial trio with drummer Chander Sardjoe and bassist Ronan Guilfoyle that recently released its debut album Tasty! (Plus Loin Music, 2010).

Mahanthappa's latest recording, Apex, (Pi Recordings, 2010) is a cross-generational collaboration with the highly influential, yet unsung saxophonist Bunky Green. Best known for a string of albums on Vanguard in the '70s, including the acclaimed Places We've Never Been, Green is enjoying a renaissance of interest as a result of Apex. The fiery, impressive effort features original compositions from both Mahanthappa and Green, as well as performances from pianist Jason Moran, François Moutin, and drummers Damion Reid and Jack DeJohnette. While Green primarily focuses on his role as a jazz educator, serving as the Director of Jazz Studies at the University of North Florida at Jacksonville, the group is an ongoing one, with future recordings and performances planned.

All About Jazz sat down with Mahanthappa to discuss the making of Apex, as well other pivotal moments in his career, over potent glasses of sweet potato schochu at the O Izakaya Lounge in San Francisco's Japantown. In conversation, Mahanthappa offers a similar combination of intrigue, inspiration and humor as that which informs his art.

All About Jazz: Describe the seeds of the Apex collaboration.

Rudresh Mahanthappa: My relationship with Bunky goes pretty far back. I first heard Bunky when I was at Berklee. I had just moved there from North Texas. The reason I left North Texas was I was hearing something that wasn't necessarily traditional in my head and I started developing some kind of "modern" vocabulary as an improviser and composer to some degree. I thought Berklee would be a better place to work that out. I hadn't yet heard Greg Osby, Steve Coleman or any of those folks. I was checking out a lot of Coltrane and 20th Century classical music and trying to reverse engineer how they created vocabulary and fodder for melodic ideas. During my first semester at Berklee, Greg Osby did a residency and played a concert at the end of his week. I can't remember liking or disliking it, but I thought there was something there that was different and very interesting. This was all happening in 1990. It was the year that Dave Holland released the Expansions album. A friend of mine put some headphones on my head in the practice room and said "Check this out." And I was like "Whoa, Steve Coleman." I couldn't believe what I was hearing when I encountered his writing and playing. I heard a kind of kinship with that music and what I was striving for. I heard Charlie Parker, Persichetti and Bartok all at the same time in what he was doing. That was kind of what I was chasing too. So, I got pretty deep into that.

Once, I was warming up for a lesson with Joe Viola, a legendary saxophone teacher who passed away a few years ago. He was listening to what I was doing and said "Have you ever heard Bunky Green?" I said "Never, but I've seen the name before." Joe then headed to this private closet of special albums and weird mouthpieces he'd loan out to students he liked. He loaned me this album by Bunky called Places We've Never Been and it blew my mind. I did a little bit of research and found out he was teaching at the University of North Florida at Jacksonville. This was in the days before the Internet, so I was calling national directory assistance trying to track down his number. Finally, I got his office number and called him. He answered and I told him who I was. [laughs] I said I really loved his album and that I wanted to send him some of the tunes I was writing on a cassette tape, which was still the format back then. My goal was to get some feedback and it was something I was doing anyway. I was always giving cassettes to people I admired to get some sort of input, and hopefully lay some groundwork for playing with these people someday. Bunky actually called me back and said he liked what he heard and that he felt my direction was unique and to keep going and pushing. That was the beginning.

I didn't have any contact with Bunky for several years after that. I ended up in Chicago a few years later when I finished at Berklee. I chose not to move to New York City right away, and instead went to Chicago and do my Masters at De Paul University. I was in the big band there. The band went to perform at the Jazz Educators Conference, which was in Anaheim, California that year. I saw Bunky there and I reminded him of our phone conversation and the tape. He vaguely remembered it. I kept telling him I had a bunch of big solo features with the big band during our performance. I did it every time I ran into him over the course of the week. [laughs] I remember coming off the stage after our Sunday afternoon performance and there he was, standing by the side of the stage. He gave me a big hug and said "There are really only four of us. There's me and you, and Greg Osby and Steve Coleman. We all have to take the saxophone into the future." That was all I needed to hear. [laughs]

After that point, we always talked about trying to do something together. I think he had mixed feelings about coming back and playing in Chicago, where he was based. He's from Milwaukee, but he definitely spent a good chunk of his career in Chicago before he went to Florida. He had a lot of history with the clubs. I think he felt if he was going to come back and do something in Chicago, he wanted it to be something big, not just a couple of nights in a medium-sized club. So, that never really panned out. We kept in touch over the years, and then my friend Mike Orloff, a major concert presenter in Chicago, asked me to be part of a series called Chicago World Class Jazz that he curates. It takes place in Millennium Park and there has to be a Chicago orientation to the concert presented. It wasn't enough that I lived in Chicago. He wanted me to involve Chicago musicians. He initially asked me to bring the Kinsmen project to the series and add a bunch of Chicago musicians to it. That seemed potentially disastrous to me because it's already such a difficult band to mobilize that I don't need to dilute or complicate it. I said "I don't want to do that, but how about if Bunky and I do this thing we've been talking about doing for years?" He said yes and we performed with a septet, including four horns and a rhythm section, featuring Chicago musicians. It went down beautifully. There were 10,000 people there and it was amazing. It gave Bunky a lot of faith in doing something together.

He's of a different generation. He's been part of a lot of things and he's been screwed over. He's had to deal with things that weren't what they were supposed to be and he's a little cautious, with good reason. When I'm 75, I'll be really cautious too. But he was really pleased and knew we had to move forward, write more music and document the project. We started talking about rhythm sections. I know Jason Moran quite well, and Jason played on one of Bunky's albums too. Jack DeJohnette and Bunky knew each other from their Chicago days, but never really played together. I was playing in Jack's band, and still am, so there were all kinds of shared histories, combined with coincidences and incredible timing. Everyone happened to be around the one week we made the album and made themselves available to do some gigs.

AAJ: Tell me about the collaborative process that enabled the music on Apex to happen.

RM: It was interesting because Bunky made it very clear from the beginning that he didn't want to play any odd meters, or play in 5, 11 or 13. What he said was "I could practice and get it together, but it'll never feel comfortable. And if I don't feel comfortable, it's not about making music anymore." For him, it was more important to find vehicles to highlight what we do, and our interaction as improvisers. So, we agreed we would each write four or five tunes for the project. I thought to myself "How can I write a blues, a rhythm changes tune and a "modal" tune at this point, when I haven't written anything like that since my early college or late high school days? How can I do that and still have my voice present in that?" I also needed to create something that leads to a lot of healthy, productive interaction within the ensemble as well. So, that's exactly what I did. I wrote a blues, a rhythm changes tune, a modal tune, and a couple of other things. [laughs] Bunky's tunes very much have form and chords and all that, but there's a little bit of looseness in how we can play the melodies and how they dovetail off each other. They are very dialog-oriented, like we're talking to each other within them. It was also really about trying to bring the band as a unit to life. Arrangement-wise, we tried a lot of different things. A lot was right on the spot, in that as soon as we played it, we said "Oh, that sounds great. I guess that's the take for the record." [laughs] That was really cool and fun. We had two days to do the album, so we were able to play around with lots of different scenarios within the tunes we had. We didn't actually write any music together, but we each wrote with the project in mind.

AAJ: Describe the dynamic of the rest of the group and how it informed the proceedings.