By JERRY D'SOUZA
September 9, 2011
Sign in to view read count 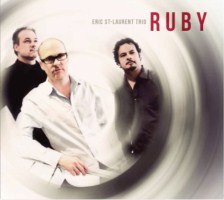 Montreal born guitarist Eric St-Laurent learned to play the instrument in his home town before moving to New York, where he mastered the art of improvisation. While many jazz musicians would have been happy to find a grounding in New York, St-Laurent had a wider vision. He then moved to Berlin, where he played with German and Scandinavian bands during the 10 years he lived there. As an adjunct, he also began composing music for film. With that under his belt, he moved to Toronto, Canada, a city that offered many more opportunities, as he made his presence felt playing with his trio and Carlos Del Junco, as well as with prime Canadian musicians including Richard Underhill and the Shuffle Demons.

Afro-Cuban music is the core of a trio that sets it up with style on "Ruby." The melody dances in on the fly, with percussionist Michel DeQuevedo edging St-Laurent. The guitarist plays full-bodied, well-rounded notes, his enunciation clear and immersed in the refrain. When he takes off on a trajectory, his ideas are judicious and do not forsake the nectar of the tune. DeQuevedo ups the ante with his pulsing sense of rhythm, turning this track into an absolute delight.

"Epic" has an air of classicism, built on bassist Jordan O'Connor's arco, which dissolves into an improvisatory unison as the trio opens up new avenues, the approach deliberate yet convincing as it moves down unusual alleyways and opens surprising vents of invention. And then, in a renewed burst of inspiration, the trio ups the tempo and closes out in an array of dazzling color.

The CD also features vocalists Kgomotso Tsatsi and Justin Bacchus. Tsatsi has a haunting voice that cleaves to the emotion of the African-inspired "Ukumamahteka." She and St-Laurent imbue the song with a resplendent beauty, the acoustic guitar providing the shimmering bedrock for the swaying vocals. "Breaking at the Seams" is the lyrical Bacchus' vehicle, a ballad nestled in the cup of a voice that makes the most of the melody, as it conveys heartbreak with understated power.

With Ruby, St-Laurent goes well beyond Afro-Cuban music, to show how much at ease he is in various idioms. His approach can be spare or full-bodied, or it can take off from the written note or find its soul in free motifs.