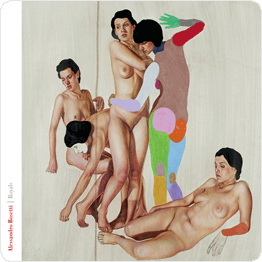 Musician/sound artist Alessandro Bosetti continues to explore the connection between speech and music, with yet another set of speech loop recordings. On Royals, like on his previous discs—Her Name (Crouton, 2007) and Exposé (Die Schachtel, 2007)—he orchestrates the tone, pitch and cadence of a speaker, talking or reading text.

Much like pianist Jason Moran or drummer Dan Weiss' experiments with the articulation of telephone calls or movie scenes, Bosetti begins each of the three tracks with spoken language. "Gloriously Repeating" starts simply enough, with the orchestrated lines repeated. As the track builds, the words begin to mean less and the musical aspects of the sound more, begging the question: Which came first music or language?

Of course, language is musical, and music can be a language. Bosetti has tapped into the essence of sound and just how cadence and accents can be as beautiful and different as Lester Young's or Dexter Gordon's tenor saxophone sound and their spoken voices.

As each piece builds, the distance from the original text grows and the variations and differing machinations evolve, turning speech into babble. He creates a sort of reverse evolution of language. The French spoken on "Dead Man" is first interrupted by buzzing, then whistling and finally by an orchestrated metallic industrial rumble. Even after the spoken text drops out, the meaning remains, as if machines were themselves having a conversation.