Doc Watson and Frosty Morn: 'Round The Table Again 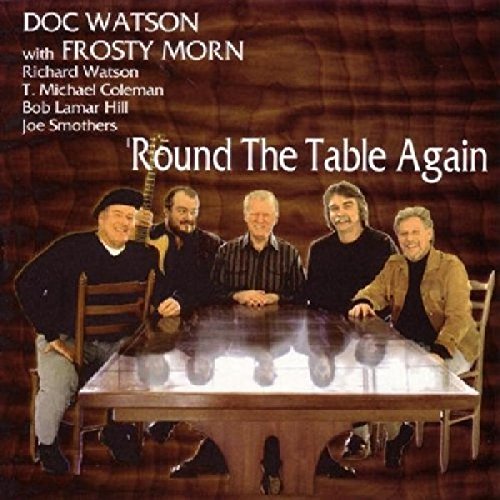 With that fitting introduction, Doc Watson, with his late son Merle’s band Frosty Morn, begin their appearance at the Wilkes Community College, Wilkesboro, North Carolina. Wilkes Community College is the home of the annual Merlefest, a traditional American music festival sponsored in honor of Merle Watson, which was inaugurated in 1988. The music contained herein proves that talent and sincerity great enough will abolish genre definitions.

Arthel Watson was born March 3, 1923 in Deep Gap, North Carolina. Struck blind in his early childhood, Watson first learned to play the banjo, then later the guitar. Watson scuffled around and finally, in middle age, received the attention his talent warranted. In 1961, Watson made his recording debut on Old Time Music at Clarence Ashley's, which he followed in 1964 with his first solo recording, Doc Watson and Family recorded with his son Merle. These recordings were riding the wave of the American folk music revival of the 1960s. As the revival waned toward the end of the decade, Watson’s star once again shined brightly on the Nitty Gritty Dirt Band’s breakthrough crossover recording, Will The Circle be Unbroken.

Watson continued to perform and record with Merle into the mid-1980s, when Merle was killed in a farming accident. After a short fallow period, Watson returned to touring and has continued to be active in the traditional American music arena well into his late 70s.

‘Round the Table Again

is a buggy ride through the dirt road middle of American music. Doc Watson has absolutely no fear of genre or repertoire. He opens the occasion with the banjo on "Lynchburg Town" and follows that with an a cappella rendering of the old minstrel song "The Coo Coo Bird." The gradually, for the rest of the show, Watson is joined by band mates. First is his grandson Richard (who looks like a young Merle) and they tear into "Blues Walkin’ Around My Bed." Doc Watson has always had an acute affinity for the blues and he performs them in a superior fashion. In the blues category, Watson also delivers on Merle Haggard’s "Workin’ Man’s Blues" and Blind Boy Fuller’s "She’s So Sweet," and John Hurt’s "C.C. Rider." There are Spirituals ("Walkin’ in Jerusalem" and "Court on High") and contemporary fare (Dylan’s "You Ain’t Goin’ Nowhere" and the McGuire Sister’s "Sincerely").

This recording has songs sung by members other than Watson. It is with this fact that I take issue. If one has Doc Watson in front of a microphone, particularly at his advanced age, then it is Watson we should hear from exclusively. It is not that his band mates Michael Coleman, Bob Hill, or Joe Smothers are bad. They are quite excellent. I would have just as soon heard a complete "Unchained Melody" or "Folsom Prison Blues" hinted at on the outtake track 17 on the disc. All of this is a mere quibble. This recording is necessary listening for Doc Watson fans and the uninitiated alike as it presents a homespun honesty and sincerity that is found nowhere else in music.