Rob Brown Trio: Round the Bend

By JOHN KELMAN
December 3, 2003
Sign in to view read count 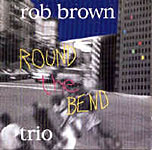 A mainstay of the New York improvising scene that includes Matthew Shipp, Joe Morris, and William Parker (who appears on this date), alto saxophonist Rob Brown continues to cement his reputation as a player of note, evidenced on Round the Bend, a varied programme of free jazz .

Brown’s fiery playing comes from the Anthony Braxton school, but the innate sense of swing that sometimes appears and then disintegrates before reappearing, comes more from the Ornette Coleman camp, specifically some of his early ‘60s Atlantic sides. But Brown has moved on, in the course of his twenty-year career, transcending both influences into a free style that is more personal.

On this set of originals with one standard thrown in for good measure, Brown, Parker, and drummer Warren Smith examine the nooks and crannies inside the leader's elliptical compositions. Pulsing rhythms break down into more jagged environments, “Loaded Hand” being a solid example of how a simple melodic idea is put forth and then deconstructed into individual components by each member of the trio.

Another example of solid deconstruction is Brown’s reading of the standard “A Flower is a Lovesome Thing.” The melody is clear, but merely a jumping-off point for their collective improvisation, which includes a beautiful arco solo from Parker.

For an album of experimental, free-style music, the set remains engaging throughout. Even on more avant tracks like “Loaded Hand,” where Brown peppers harmonic squeaks and squonks, there is a hypnotic effect that makes it somehow more accessible. The interplay, especially between Parker and Brown, is strong; this is free playing with a purpose, a sense of direction, and a sense of construction.

On the final track, “Unfurling,” the trio approaches tenderness from an oblique angle: lyrical, yet underpinned by a loose sense of time that forces the listener to fill in the blanks themselves.

Round the Bend is another strong effort from Rob Brown, who, over the course of twenty years and more than thirty albums as a sideman and a leader, continues to establish himself as one of the leading proponents of the New York free jazz scene, bringing a profound inner sense of logic to the genre.

Round the Bend is available through online sources including Drimala .

Title: Round the Bend | Year Released: 2003 | Record Label: Bleu Regard