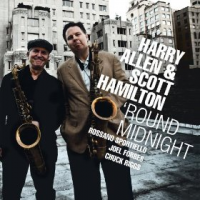 Johannes Brahms was called "the keeper of the flame" for Beethoven. Tenor saxophonist Harry Allen and Scott Hamilton are the same keepers for a tenor tradition that existed from the swing era through hard bop. The pair champions a sound and method established by Coleman Hawkins, Ben Webster and Lester Young: a broad, dense tone, both confident and hesitant. Allen and Hamilton highlight a stylistic history that ended in 1956 when Sonny Rollins and John Coltrane recorded "Tenor Madness." This music is romantic, balladic and, when played up-tempo, swinging.

'Round Midnight is a predictable recording, which is exactly perfect because one knows just what to expect from these two and their many recordings for Nagel-Heyer, Arbors Records, Concord and various other labels. It is a collection of nine standards, all having great empathy for one another and a brilliant rhythm section smoothing them out before these two saxophonists. Pianist Rossano Sportiello must be singled out for attention for his certain and sure guidance of the music. Bassist Joel Forbes and drummer Chuck Riggs are solid throughout. Each was afforded solo space that was well used.

No matter the age of the composition, whether 1912's "My Melancholy Baby" or 1958's "Great Scott," Allen and Hamilton swing them with a personal touch and professional ability. The sympatico shared between the two saxophonists is impressive. At once, they are very similar players with very different sounds even within the constraints of the material. Allen's tone is full-bodied and sure, while Hamilton's is a bit breathier, somewhere between Zoot Sims and Dexter Gordon. 'Round Midnight is not another Tenor Madness (Prestige, 1956). It is Tenor Elegance.

My Melancholy Baby; Great Scott; How Am I To Know; The Opener; Baubles, Bangles and Beads; Hey Lock; Lover; Flight Of The Foo Birds; 'Round Midnight.