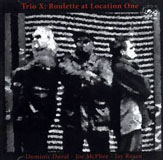 Trio X continues its increasingly longstanding tradition of meditative fire music with this stridently contemplative March 2006 live date. Not so much a series of pieces as a collective meditation on Black music and its history, the album is a palimpsest, bringing together various eras and styles in front of an enthusiastic audience.

"My Funny Valentine, for example, is heavily laden with history on both sides of the color line and the Trio X version manages to pay homage while making the theme its own; the term "theme is chosen very deliberately, because there are really no "songs or even "pieces of music on offer here. The five longish improvisations incorporate multiple themes and/or reminiscences, as when the glorious Monk composition "Evidence invades the delicacy of "Sunflower, rapidly and completely changing the mood. Similarly, "Lonely Woman is not so much performed on the second track as it is referenced, a platform for beautifully tight interactive improvisation. Joe McPhee's pocket trumpet playing is especially moving here, itself a whirlwind of historical assimilation.

The sacred is also an inextricable component here; the spiritually-inspired "David Danced, a Duke Ellington composition associated with his 1960s Sacred Concerts, gets first-class representation, a rare treat to be sure. "Going Home testifies its way through some trans-geographical gestalts, largely courtesy of Jay Rosen, whose timbrally-diverse drumming throughout is a joy to hear.

The trio's work needs no justification for those that have followed it for the past nine years. Each player brings the right versatility to the table, making for results that sustain interest and encourage repeated listening. If the disc has flaws—some intonation problems during Dominic Duval's opening arco work on "Improvs and Melodies of Themes and a strange sonic occurrence at 10:06 in "Sunflower —these are minor quibbles; the disc is another triumph for the group, maybe one of the most interesting and enjoyable statements in its growing catalogue.