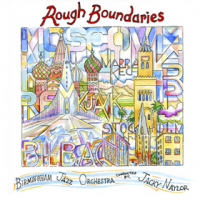 Rough Boundaries is the second album in the, to date, two-year history of the Birmingham Jazz Orchestra. A year on from debut album Burns—inspired by the poems of Scotland's own Robert Burns—the orchestra now looks away from the UK, to take inspiration from some of the great cities of Europe and North Africa.

On Burns Orchestra founder Sean Gibbs took on the key roles of conductor and composer. This time he hands over those duties to Jacky Naylor, a fellow Birmingham Conservatoire graduate, and takes a seat in the trumpet section. Naylor's five compositions are based on his experiences in five different cities—all visited in the 14 months prior to recording. Naylor wrote each composition with the aim of ..."capturing, and re-creating [each city's] character and nuances," as he puts it: the Orchestra brings those nuances to life.

These are five very different cities: differences that are conveyed by the music whether or not the listener is familiar with the places. The free-form, discordant, opening to "Moscow" suggests a slight air of menace—carried through by the horn section and David Ferris' piano—a mood that lightens and becomes more welcoming when altoist Lee Griffiths takes his solo. "Bilbao" is immediately exciting, vibrant and active, the trumpets given centre-stage with bright, energetic phrases. "Stockholm" is sophisticated, maybe even a little snooty: Naylor gives the tune a slower pace, a softer tone, and Hugh Pascall's graceful trumpet solo heightens the feel of a confident and comfortable capital. "Reykjavik" opens in rather mysterious fashion, trumpeter Tom Syson and pianist Ferris delivering restrained and beautiful solos as the ensemble builds layers of sound—the sound of the Icelandic capital's mix of ancient legend and modern cool. "Marrakech" is busy, bustling and edgy—a suitably powerful close to the album.

Rough Boundaries is another impressive album from this exciting new ensemble. It avoids the sound issues that impacted on Burns—every track comes across clearly, with excellent balance between the sections. The Birmingham Jazz Orchestra is on the move, a big band with a definite promise for the future.