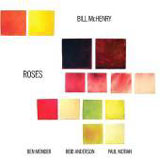 Bill McHenry's daring approach to the tenor saxophone has earned him strong critical acclaim in recent years, as well as choice gigs like headlining the Village Vanguard in New York City.

While he's in the line of left-of-center tenor sax predecessors like Dewey Redman, the 35 year-old McHenry has developed a unique sound that blends free form and structured elements into an organic whole. He's that rare free player with a gentle tone and an unhurried demeanor. Even in the midst of whirlwind soloing, he appears precise, focused and in control. On his new release, McHenry showcases all these talents in the company of a truly simpatico quartet featuring longtime partners Ben Monder (electric guitar), Reid Anderson (bass) and the ageless drum dynamo, Paul Motian.

Together the quartet engages in some of the most exciting group improvisations put on record this year; from the meditative title cut to the plaintive "The Abyss Opens Up" to more revved-up tunes like "The City" (with Monder channeling Jimi Hendrix and McHenry quoting Sonny Rollins); this is a band that clearly knows one another well and plays together with a rare cohesion. What stands out most of all on tune after tune is McHenry's concern with melody. For an artist committed to experimentation, McHenry hasn't lost sight of the importance of making beautiful music.

Roses; African Song; The Abyss Opens Up; The City; The New One; The Lizard; Keys of C; Symphony; Photo-Synthetic.