By DOUGLAS PAYNE
April 6, 2011
Sign in to view read count 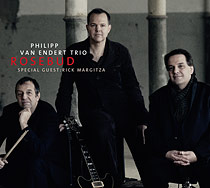 Cinema has long since rendered the word "rosebud" as something elusive and enigmatic, that cannot possibly sum up what others want it to. From the moment that Orson Welles whispers the word in the 1941 film Citizen Kane, a mysterious journey of the purely unknowable is embarked upon. But what a journey.

With Rosebud, the remarkably inspired German guitarist Philipp van Endert properly gives light to the inability of properly discussing creative music. Much in the same way that writer Whitney Ballliett once poetically called jazz "the sound of surprise," truly creative music really can't be labeled or defined, formulaic or repeatable.

This melodic guitarist, overflowing with inventive lyricism, is Kane-like in forging his own direction, regardless of convention. As the leader of his own successful label, van Endert is also like Welles' protagonist in his dictating the terms of his own creativity: the only terms one knows, to paraphrase Kane himself. It's certainly a direction worth following.

Rosebud reunites the guitarist's trio, along with special guests, saxophonist Rick Margitza and percussionist Christoph Hillmann. Each was also part of the guitarist's Khilebor (JazzSick, 2006), and the chemistry is intoxicating enough to warrant the additional exploration Rosebud presents.

The soundscape and interchange sometimes recalls saxophonist Joe Henderson's superb So Near, So Far (Musings for Miles) (Verve, 1993), with guitarist John Scofield, bassist Dave Holland and drummer Al Foster (all, like Margitza, associated with Miles Davis during his electric years).

Miles isn't on the program here, though. Van Endert and company expound startlingly well upon Elvis Presley's "Can't Help Falling In Love," the Beach Boys' "God Only Knows," and, formidably, on Michel Legrand's "You Must Believe in Spring," best known through its interpretation by another former Davis sideman, pianist Bill Evans, as well as a fascinating program of the guitarist's sinewy originals, including "Phily Ray and the Notfinders" and the title track, featuring the leader on acoustic guitar.

There's something remarkably sage about van Endert's musicianship and leadership throughout. It suggests a more seasoned, well-travelled player who has fashioned all the fads, and a career's worth of ups and downs. Only active since the mid-1990s, the guitarist has gone the distance to arrive at a place that's all his own. His playing has a strong personality that not only escapes comparison to better-known jazz guitar heroes, but fires up his associates to perform with complimentary magnificence.

Even Margitza sounds more intimately personal here than he has on other recordings, even those under his own name. He shines particularly well on the cool funk of "Landing Grounds" and Nendza's terrific "Overheated." Margitza and the guitarist make for an especially heady brew, notably on the set's opening "Reguengo" and closing "Savina."

Joy that it is, Rosebud is, like its probable namesake, summed up better in appreciation than understanding. It's meant to be experienced and enjoyed, and it succeeds.