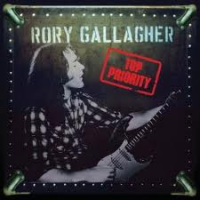 Rory Gallagher never made a bad album, but there are a select few recordings in his discography superior to the others. Top Priority is just one of those where the power of playing, enhanced by the production, in combination with the late guitarist's songwriting skills, renders it essential listening. It is, in fact, one of those Rory Gallagher discs worthy of play for the uninitiated, secure that, before it's over, that listener will hopefully understand why the late Irish guitarist garnered such a rabid following when he was alive and gathers new aficionados posthumously.

It's not quite the measure of an exceptional Rory Gallagher album to count the number of tunes that ultimately make regular rotation in the live repertoire, but it's a fair benchmark. There's a distinct similarity between "Follow Me" and "Bad Penny" in the heavy backbeat maintained by drummer Ted McKenna, and Gallagher applies slashing guitar lines to both tracks. But it's a matter of style rather than lack of ideas that holds the tunes in common, and, along with the no-nonsense attitude they carried, they eventually turned into concert crowd- pleasers.

Gallagher's abandoned approach to the tunes has as much to do with their impact in the studio as well as the stage. He brought a jaw-dropping intensity to performances in front of audiences, so it's not all that surprising he'd be able to conjure commensurate force in the confines of the recording studio. Still, the explosive likes of "Wayward Child" is stunning, all the more so as it's a natural product of Gallagher's connection with his band: bassist Gerry McAvoy, for instance, had been in tow for nine years at the time of this recording in 1979.

At this juncture, too, Gallagher knew his way around recording studios and, having recorded his previous album, Photofinish, (Chrysalis, 1978) in Dieter Dierks' studio in Germany, there was a level of comfort contributing to the craft of recording, in addition to the mere capture of the basic tracks. Collaborating with engineer Alan O'Duffy, Gallagher brought an astute sense of production to the project, a restrained approach accentuating the interaction of the band and the structure of the material. Thus, the use of electric sitar on "Philby" is purposeful rather than being merely a bit of aural gimmickry: it mirrors the imagery of the lyrics.

From a sonic perspective, Top Priority is one of Rory Gallagher's best-sounding albums, the bottom almost as prevalent as the upper register in a mix that leaves the corrosive edge to the guitars, even when multiple parts appear, as on the fevered "Just Hit Town." This reissue has not been remastered for release since its original issue in 1997, but there's no sense of any audio shortfall.

The minor changes in artwork are cosmetic at best and no additional liner content appears to distinguish the package either. The inclusion of the same bonus tracks, "Hell Cat" and "The Watcher," either of which might have made the final cut for the "official" release, highlight the possibility that the eventual reworking of Rory Gallagher's catalog in Europe may eventually render these particular versions obsolete. Yet, in the end, that has little if anything to do with the unrelenting power of the music and the continuing influence of the man who created it.