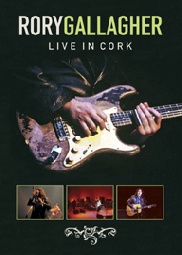 A true labor of love, Live In Cork (previously released on VHS as Messin' With The Kid) functions as a salute to the late guitarist and singer Rory Gallagher, a travelogue to the Irish city and a celebration of the bluesman's homecoming. The well-wrought graphics of the DVD menu aren't mere niceties but an extension of the colorful adventure that was Gallagher's career as one of the greatest, albeit relatively unsung, blues-rock musicians of our time.

Rory Gallagher was unique among guitar heroes of his era. It wasn't so much the tireless work ethic that made him the definition of a road warrior, or the diffident attitude toward his career that moved him to stubbornly refuse to release singles from his albums at a time such releases were a paramount means of commercial promotion. The late Irishman steadfastly clung to his roots in rock, folk and blues with an earthy attitude that, like the weathered body of his guitar revealed in the close-ups of the instrument, lent his music a gritty tenacity.

Consequently, in marked contrast to his peers of the prior generation—Eric Clapton, Jeff Beck and Jimmy Page—Gallagher eschewed compromise in any form and so engendered a loyalty in his fans that matched his own fiery demeanor onstage. Featured here with a trio in 1987 at the Cork Opera House—Brendan O'Neill drums and Gerry McAvoy on bass with occasional guesting on harmonica by Marc Feltham—the stripped down sound nevertheless roundly resonates, whether within the slashing hard rock riff of "Continental Op" or the funkier likes of Sonny Boy Williamson II's "Don't Start Me Talkin.'" Not in optimum health at the time of this recording by Irish television, Gallagher nevertheless dives into his performance with focus to match his customary abandon.

Though his bedrock principles of musicianship precluded much polish, Gallagher's performances contained no shortage of dynamics. The resounding riff at the heart of "Follow Me," like much of his hardest rocking material, supplied a dramatic contrast to the wry likes of "Ain't No Saint" with its faint traces of traditional jazz. Likewise, the jump blues that is "When My Baby She Left Me" resides squarely at the nexus of blues and jazz, and Gallagher is comfortable enough with his sources to resist any temptation to modernize it (apart from the electricity that enlivens the instruments). His steady guttural vocals, like his guitar playing, have more than enough inherent style to skirt the monochromatic, as in the single nod to twelve-bar structure, "Off the Handle," where the band conjures up an ominous drama.

Acoustic sets became a regular turn at Gallagher concerts in later years, a reaffirmation of roots as well as a declaration of maturity that accentuated the power of his performances. As on "Out On The Western Plain," the man's finger work on the unplugged guitars—a National Steel is the instrument of choice on "Wanted Blues"—sounds even more deft for its lower volume. Meanwhile, the audience's impromptu singalongs aren't all that surprising given the repeated standing ovations caught by director Anita Notaro.

Including an affectionate though not sentimental essay by sibling Donal Gallagher on the picturesque city of Cork, the liner booklet is a glossy color accoutrement that helps customize the package as more than just another addition to the posthumous Gallagher videography. Though the staple of his repertoire, "Goin' To My Hometown," doesn't appear among the baker's dozen tracks on the DVD, it might well have functioned as its subtitle.

Tracks: Continental Op; Tattoo'd Lady; Don't Start Me Talkin'; I Ain't No Saint; Follow Me; When My Baby She Left Me; Off The Handle; Out On The Western Plain; Wanted Blues; The Loop; Shadow Play; Messin' With The Kid; Loanshark Blues.