By DOUG COLLETTE
November 13, 2010
Sign in to view read count 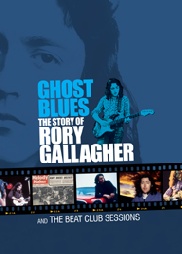 Guitarist Rory Gallagher never wanted to be a star. He only wanted to make music on his own terms and have the opportunity to play that music for an audience who would genuinely appreciate it. Watching the double DVD set Ghost Blues and The Beat Sessions illustrates the Irish-born blues-rocker's success on those terms he set for himself so emphatically, and to which he remained loyal throughout his career.

Director Ian Thullier does a remarkable job maintaining a linear narrative during The Story of Rory Gallagher. Tracing the man's roots back to his birth and upbringing in the city of Cork, Thullier wastes no time delving into the progression of Gallagher's musical ambitions through photos of the area in which he grew up and quick cuts from interview to interview with significant figures in his career, including most significantly his brother and manager Donal. Testimonials from other Irish musicians such as Bob Geldof of The Boomtown Rats and The Edge of U2 provide emotional weight to the more matter-of-fact depictions of Gallagher's evolution coming from journalists such as Dave Fanning. Recurring recordings of Gallagher himself drive those point(s) home even further, albeit in a more understated tone than the uninitiated might expect given the contrary nature ascribed to the man.

Increasingly frequent performance segments are interwoven into this narrative as the story wends its way to the formation of the power trio Taste, which was established in the late 1960s, just as Cream split and guitarist Jimi Hendrix moved his Experience to America. Without any overt showmanship, the group's stage presence carries as much impact as the intent focus of its playing, all of which arises directly from Gallagher himself: sporting leather jackets and long hair was only a cosmetic indication of the stubbornness in the leader that led to managerial disputes which ultimately led to the dissolution of Taste and the beginning of the Rory Gallagher solo career.

Because his stature in America has never really risen above that of a cult hero, it's more than just a little noteworthy to comprehend Gallagher's ascent to the upper ranks of guitar heroes of the era, comparable, at least in Europe, to Eric Clapton, Jimmy Page and Jeff Beck. That, in turn, makes it only slightly less significant to hear the story of being courted to join the The Rolling Stones: as their original bassist declares, the guitarist/composer's iconoclastic nature would never allow for a secondary role in that group, no matter how complementary their blues roots might have been.

Weaving in and out of Ghost Blues:The Story Of Rory Gallagher is his stubborn refusal to compromise his music or his musical persona of the sake of commercial breakthrough. There's some hint that he actually undermined his career potential through such steadfast adherence to his principals, but hearing the admiration that radiates from his contemporaries and his sidemen over the years, there's overriding sense he retained the purity of his music and his personal integrity in so doing.

The documentary then doesn't so much mythologize as capture the intangibles of its subject, particularly in the a matter-of-fact quality within the description of the health issues that ended Gallagher's life so prematurely in 1995 at the age of 47. The delicate description of that inexorable sequence of events unintentionally adds to the melancholy inherent in the story. Even drummer Ted McKenna's description of Gallagher's lifestyle doesn't sound so much romantic as merely pragmatic.

The production quality of the DVD content matches the clarity of the narrative. Certainly early photo, video and audio selections lack the pristine quality of that which appears by the time the story hits the mid-1970s, but the reproduction matches the varied sources. There are no bonus features on this DVD or The Beat Club Sessions, but it's emblematic of the continuity of this project that the printed booklet enclosed in the package contains graphics used prominently in the video. Reference to an article from British music publication Melody Maker, recounting Gallagher's appearance in Belfast at the height of the internecine warfare erupting in Ireland at the time, goes a long way in explaining the man's deep-rooted connection to his audience.

Given the presence of audio engineer Joe Herlihy's account of the first outdoor Irish music festival, headlined (and largely subsidized by) Rory Gallagher, the omission of much detailed production info or musician credits is especially egregious for the twelve-cut CD companion piece to the Beat Club DVD. Comprised of excerpts from 1971 appearances on the German television series as well as en entire performance from 1972, Gallagher and company seem quaint in their aversion to theatrics, yet even the no-nonsense defiance of their group persona barely offsets the kitschy graphics of the early footage. Thankfully the stripped-down acoustic rendition of "Just the Smile" is more than ample antidote to what's preceded and much of what will follow in the 90 minutes playing time.

That tune alone is a striking demonstration of the sensitivity at the heart of Gallagher's otherwise often blustery blues-rock. He doesn't treat this intimate approach as anything other than equally legitimate as his electric music and displays just as much relish, especially when working out with the bottleneck. Woefully distracting graphics afflict most of the video footage, which only makes it worth owning the CD even though it lacks all the diversity of style contained on the DVD: to hear Rory Gallagher playing the mandolin on "Goin' To My Hometown" is a revelation about a musician who lived for such moments..