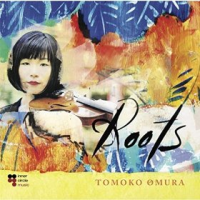 The roots of the title of violinist Tomoko Omura's second CD as leader refer to traditional and popular melodies familiar to several generations of Japanese. But if the melodies of Omura's childhood have left an indelible stamp on her musical DNA, so too has the past decade spent in America absorbing the roots of jazz. It's been six years since Visions (Self Produced, 2008), Omura's homage to jazz violin greats past and present, but the wait has been worth it; Omura's enticing arrangements of Japanese tunes wed lyricism with swing in a manner that will no doubt sound refreshingly original to ears in New York and Tokyo alike.

The sung introduction to "Antagata Dokosa" and the lulling sounds of the tea-pouring ritual that announce "Cha Tsu Mi" are the only overt references to Omura's origins, with respect to the Japanese national anthem, which Omura reimagines in two lyrical vignettes. On the whole, the music is marked by the buoyant rhythmic compass provided by bassist Noah Garabedian, drummer Colin Stranahan and pianist Glenn Zaleski, with the inherent lyricism of the tunes—directed by Omura—the unifying thread. Guitarist Will Graefe doubles on rhythmic and lead duties, his rougher-hewn edge contrasting with Omura's impeccably clean tone, while Stranahan's tireless bustle significantly shapes the feel of the music.

At times there's a sweet, Stephane Grappelli-esque swagger in Omura's playing, notably on the swinging Take Izumi's "Ge Ge Ge." In general, however, she neither flaunts her jazz influence nor hogs the spotlight, allowing her charges plenty of space to shine, while juggling the instrumentation effectively so that the music remains refreshingly engaging throughout. That said, Omura is a compelling soloist—her individual narrative on Chuji Kinoshita's "The Mountain" truly sings—though the balance struck between individual prowess and the quintet's collective voice is one of the underlying strengths of Roots. Throughout, Omura's quintet plays with the energy of young guns and the nuance of old hands.

Nowhere is this balance better demonstrated than on Rentaro Taki's "Kojo No Tsuki"; Zaleski, Omura and Stranahan all impress, but it's the collective vibrancy that makes this quasi hymnal version of a song known to successive generations of Japanese school children since 1901—and famously interpreted by Thelonious Monk on Straight No Chaser (Columbia, 1967)—so successful. Likewise, the gently intertwining quintet strands on Teiichi Okano's delightful "Hometown" contribute as much to another vaguely church-influenced number as Omura's achingly lyrical lead lines.

Omura switches between acoustic and electric violin either side of melodious bass and piano interventions on the lilting "Tinlagu Nu Hana" -an imaginative reworking of a traditional tune. Likewise, vivid arrangements of "Soran-Bushi"—an old fishermen's shanty—and "Chakkiri-Bushi"—a tea pickers' worksong from the 1920s—show Omura's love of tradition and her willingness to recast it to her own lyrical, swinging design. "National Anthem (Reprise)" concludes a consistently impressive set on a serene note, with Omura's emotive lines lent loose yet sympathetic accompaniment.

Rhythmically vibrant and melodically satisfying, Omura merges two distinct traditions with passion and panache; the result is music that's bold in design and beautiful in execution.