Roots In The Green Mountains

By DOUG COLLETTE
July 29, 2017
Sign in to view read count
The vibrant music community of Burlington, Vermont is a veritable fountainhead of the gestation of new and varied forms of this greatest of all the arts. The earthy elegance of Vorcza is one thing, the visceral impact of The Seth Yacovone Band something else altogether. And the roots-based work of Bardela and Kyle Chadburn is distinct unto itself: their original efforts build upon a traditionalism far removed from the eccentricities of Phish and their offspring such as Twiddle is. Nurturing influences deeper than the Grateful Dead or Gram Parsons—can you say Dave Dudley or George Jones?—the music of Bardela and Kyle Chadburn comes naturally to them, an admirable attribute indeed since both refuse to settle for what comes easy. Consequently. it should come as no surprise that the titles of their respective efforts are so similar: they are naturally inclined to aim high. 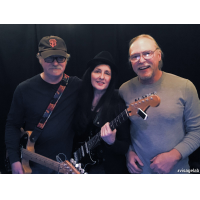 Redefining Americana on multiple fronts, "Here in LA" is an ideal opener for the Bardela EP.The vocal harmonies that are the band's stock in trade sound tremulous as ' the day begins,' and the accompanying mesh of guitars with Jeff Barrows' bass effectively sets up the full-band complement that appears on "The Crow." Here the ominous air of the initial number, somewhat veiled by group singing, turns immediately palpable when Mark Christensen's lead guitar conveys real danger. It's a tribute to the versatility of Bardela (their moniker a metaphor of their unity as a composite from each of the members' surnames names) that such a stripped-down alignment moves with such confidence from such a foreboding atmosphere to the soothing likes of "In The Country;" the contrast between Artie LaVigne's lead singing and Cooie DeFrancesco's voice, in gentle counterpoint, conjures the sensation of 'livin' the dream,' and, in doing so, restores truth to the cliche. All of which makes "Country Comes to Town" the logical conclusion of this set of songs titled Sky: written, arranged and produced by rhythm guitarist/vocalist LaVigne at engineer Bennett Shapiro's Mad Tech Sound studio, the gentle boogie of Zack Lavigne's drums here emphasizes the staunch independence at the heart of this unassuming work. These four cuts, available as a free download from bardela.com, could easily form the foundation of a full-length album with the addition of more rockers and perhaps even an a capella track to further broaden what's already a deceptively extensive vocal and instrumental range. 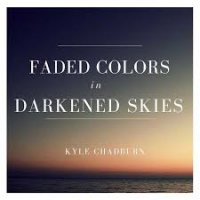 Having developed into a musical renaissance man of sorts around his native stomping grounds in Vermont's Northeast Kingdom, Kyle Chadburn belies his years by playing solo and with at least two different aggregations of musicians, coincidental with the completion of his first recording, the precocious maturity of which belies the fact its a debut. In fact, most of the original material that comprises Faded Colors in Darkened Skies, whether the vividly imagery of"Gasoline" or the sharp rocking of "A Long Hard Ride," cleanly transcends the occasional easy rhymes of the lyrics and stock phraseology in some of the titles, And the performances as well as the songs themselves are superior to the occasionally homogeneous arrangements such as the bluegrass by-the-numbers intro of "Ferris Wheel; " the author of all this original material has an ingratiating vocal style that sounds even more emphatic when backed with the steadfast drumming of Brett Hoffman (aided and abetted here by a trio of equally staunch bassists in the persons of Chris Doncaster, Gary Matthews and Bill Prue. Besides assuming the roles of singer, songwriter and guitarist, Chadburn took on the the duties of co-producer here with Colin McCaffrey at the latter's Green Room Studio, where all the recording, mixing and mastering was completed for impressive sonic clarity. This concentration of responsibilities imparts continuity to a record on which the honesty of introspection in songs such as "Almost Over You" sounds as striking as the album's evocative cover art looks.

Tracks: Here in LA; The Crow; In The Country; Country Comes to Town.

Tracks: Ferris Wheel; A Long Hard Ride; Gasoline; I Can't See You (Loving Me Again); Runaway Train; Almost Over You; Annabelle; All This Sin: Places That I've Known; By & By.