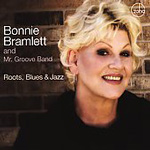 Bonnie Bramlett is back. She is best remembered for the music she made during the sixties and the early seventies with her husband Delaney. Their brand of the blues was good enough for them to open for Blind Faith and draw the likes of Dave Mason, Leon Russell and Eric Clapton to play with them. Times changed, the marriage ended, Clapton moved on and Bramlett went on to a solo career and later into acting.

Bramlett can still sing the blues with passion, adding an occasional growl for effect. She comes off the strongest when she shapes a song to her own image. She makes a particularly compelling statement on Sam Cooke's "A Change is Gonna Come, even though there is a rasp when she hits the high notes. Yes, her voice has changed, but that is to be expected with the passage of time. But there can be no denying she still has passion, which she shows much of the time. She misses out on the core of the jazz song "I'm Confessin', but she does turn the country tune "That Lucky Old Sun into a jazz-inflected song with phrasing reminiscent of Louis Armstrong. There's no harm in that, is there? And she certainly knows what to do when she has "No Particular Place to Go, slowing the piece down and giving it an earthy sensuality.

Love The One You're With; I Can Laugh About It Now; No Particular Place To Go; I'm Confessin'; Gotcha; That Lucky Old Sun; Mercy; Mercy; Mercy; A Change is Gonna Come; Carefree; Work Song; Love Hurts; Harlem Nocturne.