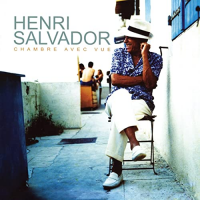 French cabaret singer Henri Salvador was the toast of Paris in 1935. And it's remained that way ever since. Chambre Avec Vue was released two years ago in France on the Source label and was later selected album of the year by Les Victoiries de la Musique. Its reissue by Blue Note contains a few minor changes: English lyrics for selected songs. A pleasant entertainer with a youthful, soft-edged voice that recalls Jobim, Salvador offers something for everyone.

Lush ballads and light, romantic bossa novas explore the sunny side of life. Averaging three and a half minutes per arrangement, Salvador's popular songs are backed by large studio orchestras and smaller, acoustic ensembles. The inclusion of swing music reflects his admiration for American jazz. The singer, who once worked with Django Reinhardt, shows an affinity for music that is both popular and natural. His romantic delivery is sure to find success among those who haven't yet had the pleasure.