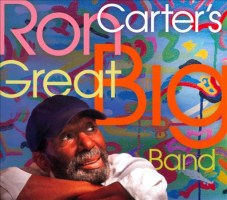 There is practically nothing that Ron Carter has not done, including actually playing second bass fiddle to Charles Mingus on Three Or Four Shades Of Blue, (Atlantic, 1977). Ever since the world shone a spotlight on the bassist when he graced the great quintet of Miles Davis, with Tony Williams, Herbie Hancock and Wayne Shorter, Carter has been recognized as one of the premier jazz bassists of the time. Many of his albums—including Uptown Conversation (Embryo/Atlantic, 1989), his trio recording with guitarist Herb Ellis and Kenny Barron, Jazz, My Romance (Somethin' Else, 1994), and Mr. Bow Tie (Somethin' Else, 1995), with Gonzalo Rubalcaba, among others—have already become minor classics. This appears where Ron Carter's Great Big Band is headed as well.

Taking a cue, it has been posited, from the bands of Gil Evans( in which Carter played), this one has been similarly crafted. There is, however, a marked absence of reeds such as flutes and only one double reed, the English Horn, and no oboe or bassoon. Remarkably the woodwinds and brass carry all of the weight here and the writing is sophisticated as well as wholesome. In many respects this is an old-fashioned Big Band, set up in traditional format, with even the bassist playing in the back. And Carter is once again at the top of his game. He plays with deep intonation; his time-keeping is flawless; and his sense of harmonics is majestic, as he carves a melodic bass line and tantalizing the band by continuously dancing around the root notes of the chords assigned to play. Occasionally he will shift the pulse and speed up the tempo, or brilliantly employ double-stops ("Footprints" and "Loose Change"), or even the accent, to alter the music's flavor. His walking is ever so elegant and when he solos the hush of the band is more in reverence than silence.

Carter has always been an extremely exciting soloist, playing notes that no-one could have predicted would belong to the harmonic progression. His angles are always sharp—acute or obtuse—and his lines are like palpitating hearts that occasionally alter in rhythm by skipping a beat or two. Musicians always hold their breaths as a result, but Carter always brings the song home. He does so here on many occasions, most notably on Dizzy Gillespie Alumni All-Stars "Con Alma," which Carter once played behind Chick Corea and Stan Getz on another classic recording, Sweet Rain (Verve, 1967). Carter has also become like his old boss—a stickler for time—and has little patience for those who are not. But he is also one of the biggest advocates of young talent. Some of these musicians are in this band, including saxophonist Wayne Escoffery, who turns up the heat by "fatbacking" on "Sweet Emma," along with trumpeter Alex Norris and baritone saxophonist Jay Brandford. But it is Carter who mostly steals the show, especially on John Lewis' "The Golden Triangle," but on several other charts as well, on this exquisite album.