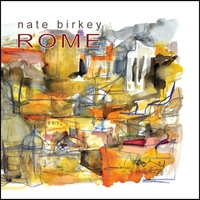 With this listenable and relaxed album, trumpeter Nate Birkey joins with four excellent musicians he hooked up with while playing in Italy to deliver a set of mostly ballads in his signature style with introspective improvising, empathic warmth, and minimal vibrato. His playing here is reminiscent of Bix Beiderbecke, one of Chet Baker's formative influences. The band, consisting of Roberto Tarenzi and Manuel Magrini alternating on piano, Luca Bulgarelli on bass. and Alessandro Marzi on drums is well attuned to Birkey's approach. Their interactions are subtle and mutually stimulating, much like the iconic Bill Evans trios' "conversational" interplay.

Rome is a city with a long and turbulent history that has meant many things to many people. However, this is the Rome of the small streets, the pensiones, the cafes. It is the inner Rome, a place in the hearts of the romantic Americans who wander through the city in the evening and late at night. Everything Birkey plays is a reminder of something in himself and his life evoked by time spent in The Eternal City. Bemused in his wanderings, Birkey knows that life is bittersweet, but worthwhile.

The first track, a Birkey original, "Adriatica" is a suspenseful reflection that starts out with a tom-tom drumbeat evoking mystery, then in subsequent choruses, evolves into a seductive mood, and finally, a feeling of a pleasant day and a nostalgic look back, all with just a touch of a Middle Eastern flavor. Birkey deftly portrays these shifting moods with his trumpet and arrangement.

Next, we hear what may be the coolest version of "You Go to My Head" on record. Birkey's vocal rendition is innocent and affectionate, with none of the existential angst of, say, Kurt Elling. Birkey's muted trumpet solo includes skillful improvising with clear phrasing and ideas, as well as some of the sweetness of Warren Vache. Magrino's fine piano solo anticipates the artful work of both pianists that appears throughout the recording.

"Estaté," the hit bossa nova tune made famous by Joao Gilberto, was actually composed by the Italian Bruno Martino, connecting it to the album theme. Birkey begins in the lower register of the trumpet which brings out the lovely way the melody ascends. Bulgarelli on bass and Marzi on drums articulate the bossa rhythm with finesse, and hold back on the tempo in just the way called for by the song.

The great composer Ennio Morricone's (and his son Andrea's) "Cinema Paradiso" is the title tune of the 1980s multi-award winning movie that involves remembrance of the joy and pain of childhood played out in and around a small movie theater. It opens with Tarenzi's open pedal piano accompanying a quiet trumpet introduction. This rendition gives a sense of recollecting in tranquility.

Charlie Haden's "Our Spanish Love Song" offers a soft suggestion of a flamenco dance in keeping with the introspective nature of the album. Birkey's "How I Find You" is a lovely, tender ballad that in due time may become a standard. Magrino provides a fine piano solo with a Bill Evans touch, and Bulgarelli's bass sounds much like the kind of solo Eddie Gomez might have done with Evans.

Michel Legrand's windfall overplayed song, "Windmills of Your Mind" at first surprises us with its slow rubato intro and a slight echo effect. Soon the tempo picks up with more of the Legrand sound. The inclusion of the tune is redeemed by a rich conversation between piano, bass, and drums and Birkey's exquisite trumpet solo at the conclusion.

If you think the singer on "Let's Get Lost" is Chet Baker, you won't be the only one. Birkey's vocal and trumpet sound just like Chet Baker sings and plays. Baker played often in Italy, and one of his best album productions was The Italian Sessions (RCA, 1996). One can't help but feel that Baker was a major inspiration for Birkey in this recording.

Birkey's "Roma di Notte" is a lilting dance melody with an Italianate flavor. Its melancholy quality seems to say that "Life should be taken lightly and enjoyed today, because there will always a down side." Another Birkey original, "Enea," is a hybrid of a church hymn and an Americn plainsong. And the final track, "Bianca," is a tender Latin ballad. Although the theme is Rome, the album definitely has an international flavor, and it could be said that a certain homesickness for America can be heard in the silences between the notes.

In this day of Internet downloads, the album covers, which used to be valued, are too easily neglected. For this album, the CD cover design by Kathy Ridl, the cover painting by Giorgia Marzi, and the photos by Paoli Soriani are especially fine and convey the feeling of warm closeness between the musicians which is also experienced in the music.