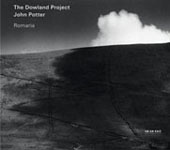 "Genuinely knowing ourselves always involves knowing how others see us...The meaning of a culture reveals itself in its plenitude only through encounter and contact with a culture different, even alien to it." writes ECM founder Manfred Eicher in Horizons Touched: The Music of ECM (Granta, 2007).

Besides a similarity to Lacanian thinking, these words lay out the founding philosophical precepts governing Eicher's highly-regarded enterprise.

Yet another example of his trailblazing steerage and vision, the Dowland Project's Romaria builds on the same aesthetic tenet as Officium (ECM, 1994), the proverbial, genre-blending collaboration between jazz saxophonist Jan Garbarek and early music vocal group the Hilliard Ensemble that Eicher imagined during a long car drive across Iceland's lava fields listening to Cristobal de Morales' "Officium Defunctorum."

Quietly determined to make new with the old, Potter and the ensemble improvise to their heart's content on a repertoire comprised mainly of plainsong, traditional and Minnesinger songs, as well as sacred works from the Renaissance. Interspersing instrumental sections in between the vocals, and even going so far as to dive into collective improvisations, the quartet nevertheless proceeds cautiously with a refreshing, albeit somewhat un-unanimous historical detachment.

Thus "Pulcherrima Rosa"—a touching poem dating from late 15th century also featured on Officium—spins off "Saudade," one of Romaria's two entirely improvised tracks. Reborn from their distant Iberian ancestry, "O Rosa" and "La Lume" also stray out of conventional performance practice. Excoriating Valent for his use of modern, flanger-sounding effects on the former and his Romantic, trills-filled solo on the latter, purists shall have plenty to chew on. Conversely, amateurs of good art music will find such alien moderate techniques simply enthralling. In fact, the whole disc is more about taking a different perspective on historical material than reenacting it.

The album's second half changes register completely, elevating into the Benedictine sounds that foster the St. Gerold Monastery's arcades. The juxtaposition of Potter's airy, melismatic chanting to his acolytes' pure harmonies makes for a truly blissful experience.

Well-versed and loving of its traditions, the members of the Dowland Project appropriate this music. By putting themselves at the centre of the music through their respective improvisational sensitivities, they allow it to touch on new horizons.

About The Dowland Project