By ERNEST BARTELDES
July 12, 2008
Sign in to view read count 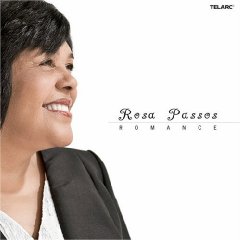 On Rosa Passos' new release, the "female João Gilberto" emerges with a selection of tunes all having to do with the faces of love, from asserting one's feelings towards a significant other to dealing with the prospect of being alone. On "Preciso Aprender A Ser So," she sings about coming to terms with the end of a love affair with the resilience of a survivor and demonstrates courage by taking on Chico Buarque's "Atras Da Porta," a tune that few singers have attempted since Elis Regina made her definitive rendition in the late '70s. In her version, Passos avoids repeating Regina's emotional delivery by singing as someone finally realizing she's in a one-sided love affair and needing to fix the damage.

Backed by a quartet of Celso de Almeida (drums), Vinicius Dorin (sax), Helio Alves (piano) and Paulo Paulelli (electric and acoustic bass), Passos took the stage at Jazz At Lincoln Center's Allen Room in late May, kicking off an inspired set with the perfect introduction, "Ginga Morena," an up-tempo samba. After introducing the band, she continued with a song from Romance, Brazilian songwriter Djavan's "Alibi," singing in the trademark near-whisper voice drawn directly from the Gilberto bossa nova rule book.

Most of the musicians left the stage as Passos picked up her acoustic guitar for "So Danco Samba," featuring Paulelli on acoustic bass and mouth percussion, an intimate moment that gave Passos the opportunity to scat through the melody. The traditional bossa material continued with "Pra Que Discutir Com Madame," a humorous tune whose lyrics narrate the story of a high society lady who believes samba is a wild beat that promotes alcoholism and disorder. The band returned for two Passos originals: "Verao," a groovy jazz-inflected samba that celebrates the coming of summer, and "Pequena Musica Norturna," a more traditional samba.

Passos is at the top of her form as a performer and her band carefully crafted each song to fit her delivery. Paulelli—who also wrote the arrangements for most of the tunes on Romance—was having an inspired night, almost stealing the show during moments. It was a memorable performance that was only marred by the fact that Passos did not return for an encore.