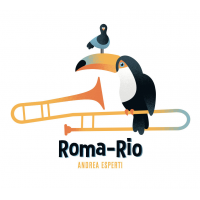 Putting on this record, you'd be forgiven for thinking that "Roma nun fa la stupida stasera" was a Brazilian jazz staple. But the song is of Italian vintage, like everything that follows on this atmospheric, laid-back album. Described by Swiss-based trombonist and bandleader Andrea Esperti as the "greatest hits of Italian song crashing Rio's Carnival" or, even more evocatively, as "the spirit of La Dolce Vita set to the rhythms of the samba," Roma-Rio is Esperti's love letter to two traditions that run deep in his heart. From whichever angle one approaches it, this is music that regards listeners with its depth of feeling and comfortable execution. Esperti proves to be a savvy and accommodating catalyst for the nontoxic reactions that ensue, one who welcomes his fellow musicians to emote freely.

Guitarist and cavaquinho player Ademir Candido, who like bassist Dudu Penz is a Brazilian musician living in Switzerland, was heavily involved in the project not only as performer but also as arranger, helping Esperti to adapt this music to Brazilian key signatures. It was also Candido who drew on an old association with Italian flutist Nicola Stilo, known for his long stint with Chet Baker and who enthusiastically agreed to be a part of the sessions. Roger Blavia, one of the more active drummers in Spain, along with pianists Ornella Ponnaz and Sandro Savino (with whom Esperti has played as part of a big band led by Oscar Del Barba), round out the bottom end, while a handful of renowned percussionists add their hues to the palette. Esperti's brother Antonio on clarinet and accordionist Antonello Messina (a regular with Paul McCandless) round out the group.

Roma-Rio consists of popular Italian songs (musica leggera) from the 1920s to the 1970s, all reimagined through a Brazilian lens. Esperti's love for these songs goes back to his childhood, when he used to accompany his saxophonist father in a touring band along the Adriatic coast. Over the years he has collected hundreds of such songs, but here has given priority to those best adaptable to the samba or bossa nova style. In addition to enhancing an overall mood, each track spotlights a unique talent from within Esperti's cohort.

Stilo's artistry glows in "Senza fine," a veritable street scene come to life to the rhythms of Candido and Penz underneath. The latter's bassing sings through the core of "Canzone per te," a track that is all the more impressive for its restraint, while Candido's soloing in "Il cielo in una stanza" guides the set along its jazziest detours. "Amore baciami" is an even more intimate vehicle, this for Messina's bellows, as is "Le tue mani" for brother Esperti on clarinet. The sensitivity of the band's inner groove is at its finest here.

Esperti's trombone is, though, a reigning force throughout. As comfortable navigating the sparsity of "Reginella" and "Estate" as the rousing theatrics of "Quando, Quando, Quando," he imbues robustness with tenderness and vice versa as motifs roll off his proverbial tongue with ease. Whether dominating the stage or trading licks with Savino on Rhodes, he is always where he needs to be. Even as the percussionists strut their stuff in the final "Nel blu dipinto di blu," one can only smile for Esperti's having shown us a good time.

In an about-face from his last album, Le Voyage d'Hannibal, which involved electronics and more outside-the-box improvisation, Roma-Rio occupies its own universe. Here the focus is on the art of melody and of the serious joys of music reclaimed from the popular landscape. While gathering information for this review, Esperti told me that his toddler son is a big fan of this record, and perhaps no other validation could be so sweet as to create memories for the next generation by drawing upon those of the last.