By DOUG COLLETTE
November 17, 2018
Sign in to view read count 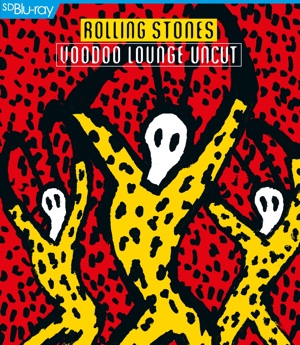 If there's anything better than issuing a previously-unreleased recording of some kind, it's putting out a fully-restored piece once available only in part. As indicated by its title, the The Rolling Stones Voodoo Lounge Uncut represents the full and complete performance, in proper running order, from Joe Robbie Stadium in Miami. Prior to this DVD/2CD (or Blu-ray/2CD and limited vinyl) package, only portions of this November 1994 concert have been available in various formats. but this one compensates and then some.

The first Stones tour and album in five years, this year-long plus road jaunt followed in the big production precedent of Steel Wheels (Rolling Stones, 1989). A gigantic stage set-up was designed in part to accommodate enlarged band with horns, backup singers Bernard Fowler and Lisa Fischer augmenting the core group of four aided and abetted with bassist Darryl Jones (in his first tour with the band in place of original member Bill Wyman after a stint with Miles Davis). Yet even with animation on display, the giant productions screens would not mean much if the sound didn't boast the same clarity of the video—which it certainly does here—or more importantly, if the band didn't cook: showmanship may rival musicianship here at times, but never takes precedence over it, even on a chestnut like "(I Can't Get No) Satisfaction" that might otherwise descend to crowd-pleasing for its own sake.

The only drawback to this expansive setting is that Jagger insists on running back and forth across the broad wings to the point he's a bit too winded to sing with the requisite strength demanded by the likes of "Tumbling' Dice." To his credit, he slows down enough to imbue "Beast of Burden" with all the attitude it will hold (as it was written for Some Girls (Rolling Stones, 1978). Otherwise, the guitars always pump hard, driven by Charlie Watts' drumming, that is when notes in solos don't peal past each other and erstwhile Allman Brother (circa "Jessica") Chuck Leavell adds just the right spice with (especially) piano or organ, even on newer material like "Sparks Will Fly." Assembly of the basic quintet on a small area out into the crowd on the floor offers the best of both performance worlds. Acoustic arrangements like "Angie" effectively bringing some measure of intimacy to the football venue, while also affording Jagger another chance to prove what a great singer he still is, not to mention how Richards and Wood mesh even without electricity.

With the Stones themselves performing at such a high level, any guests would be challenged to rise to the occasion. Not all do. Sheryl Crow, for one, strains on "Live With Me," over-matched in her role as rocker, as is guitarist Robert Cray. Even though Cray is in his blues element on Robert Johnson's "Stop Breaking Down, " he's too polite in his playing to fit in with the rough-and ready Stones. But the stars defer to Bo Diddley on "Who Do You Love" -and rightly so -the result of which gracious camaraderie is a good time had by all, on stage and, given the fairly tumultuous response, by the roughly fifty-six thousand attendees too.

Complementing the main content of Voodoo Lounge Uncut are a handful of culls, near a half-hour total, from the New Jersey stop of the same tour, none of which carry over from the post-Thanksgiving show. These "bonus tracks" remind viewers that the full concert presentation was no illusion but rather a tremendous exhibit of stamina that would not mean so much if it all weren't so artful an offering. Renditions of "Shattered" and "Happy," among others, reaffirm not the just the range of material on display, but the consistent strength of these shows. Even with the set lists synced with Mark Fisher's stagecraft (designed in part by Jagger and Watts), there's no mechanical feel to the playing, even if, no doubt for the sake of the pay-per-view broadcast that night, there's little time for improvisation except in the most narrowly-circumscribed parameters. The ensemble does stretch out on "Miss You" though, with Jagger on guitar (!) leaving its disco overtones way behind in doing so.

David Mallet directs the camera fluidly, from angles all around the stage (also on kinetic photo display within the enclosed twenty-four page booklet as glossy as the digi-pak itself inside and out), illustrating just how much action's taking place for the two and a half-hour duration of the show. The Rolling Stones circa 1994 conclude, not surprisingly, with a clutch of arguably their best (and certainly their most durable) material, not the least of which are "Brown Sugar" and "Jumpin' Jack Flash," in an appropriately high-powered and altogether celebratory finish.