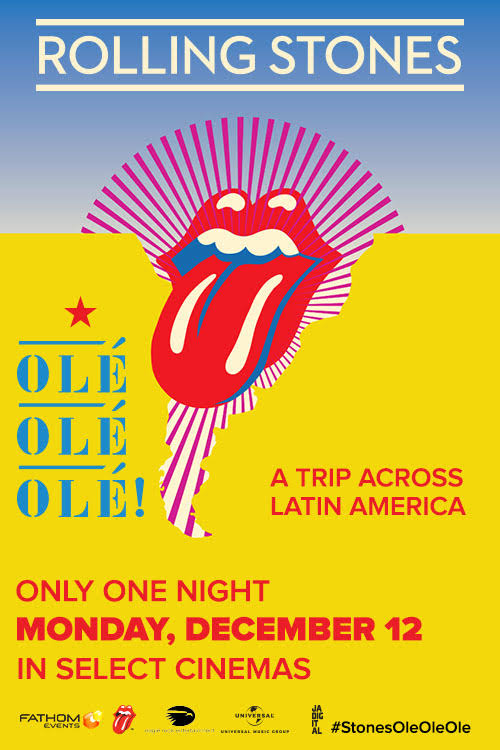 Although it is compels watching more than once to absorb the varied detail within its two-hours plus duration, Rolling Stones 99' Latin American tour documentary, Ole Ole Ole!, is worth seeing just for a single, priceless five minute interval near its mid-point.

After guitarist Keith Richards and vocalist Mick Jagger laughingly reminisce about their visit to Brazil in the Sixties, they recount the germination of "Honky Tonk Women" as it arose from sitting on the porch of their rented home singing and playing playing Hank Williams and sundry other country songs. Filmmaker Paul Dugdale then cuts to a shot of the two long-time collaborators in a backstage dressing room where, with Richards alone playing acoustic guitar, Jagger sings the original lyrics to the tune, unerringly nailing the vocal, with his partner provides uncannily complementary harmonies.

In this single shot, the director captures the fifty-year plus camaraderie between the two men. Strained to the point of fracture more than once during their career, as Richards admits in a voice-over later in the film, it is also the source of a chemistry that renders them both humble and courageous as they continue performing as they did early in 2016 touring South America. On a nine-stop jaunt that culminated, after no little angst on the part of the producers and operations team, with a free concert in Havana Cuba taking place just days after Barack Obama became the first American president to visit the island in eighty years, the iconic British band's appearance is anything but anti-climactic.

The American head of state's visit, in fact, conflicted with the initial plans for the show and as recounted in a scene where Jagger discusses the prospective change in plans, there's no little humor arising from those circumstances (or those presented by the Pope's disapproval of the rearrange date of March 25, which turned out to be Good Friday). Because Paul Dugdale doesn't dwell inordinately on such factors, he's able to cover a lot of ground during the fast-paced duration of Ole Ole Ole!: A Trip Across Latin America.

By adopting a narrative interweaving content devoted to each stop on the tour, interwoven with updates on the sequence of events involving the show in Cuba (aptly introduced by snippets of Stones studio recordings), the director creates some palpable suspense (even though the end result of these machinations is a given). In doing so, he renders poignant the moments of the movie leading up to the second the Stones take the stage to thunderous applause from an audience that may have approached more than a million people. And, intentionally or not, juxtaposing the squalor in some of the local neighborhoods with the high-rise modernity virtually next door, the filmmaker (and, by extension, the Stones themselves as executive producers) emphasizes the escapism intrinsic to the fervent adoration of the Stones: it's far deeper and more widespread than just the once-underground cult of the 'Rolingas.'

This denouement works too because he, like the band itself particularly Jagger, marries the history of the Rolling Stones to that of the culture of each country the Rolling Stones visit, including Argentina, Chile and Mexico. And as self-serving as it sometimes sounds—in equal proportion to guitarist Ronnie Wood's somewhat forced declarations of risk-taking from his elegantly protected environment on the road-the band's observations on the nature of the rebellion their music represented takes on wider meaning, not to mention, some credible truth when it's placed in the wider context of rock and roll at large.

No question that in offering Ole Ole Ole! as a one-night only theater showing via Fathom Events (in the Palace 9 Vermont venue attended by a twenty or so head count similarly-sized to that which came to see Ron Howard's movie on The Beatles Eight Days A Week), the Rolling Stones are not only making a case for their cultural influence but their own humanity over the course of the five decades they've been together,. But even as much as they seem condescending inviting native artists backstage to perform, visiting local venues for the same purpose or arranging meetings with local musicians and the band's frontman, by letting statements from the 'locals' speak for themselves alongside footage of streets filled with fans watching the band's motorcade (truly reminiscent of the Sixties indeed), there's a definite sense of collective generosity in the group's willingness to regularly return to the road, not to mention arrange such momentous events as the free (!) concert in Cuba. The shadow of Altamont is only vaguely visible, but make no mistake, it's here.

Particularly within the ranks of the band itself, touchingly described by easygoing and good-natured drummer Charlie Watts, that inclusive spirit becomes even more palpable in the other Dugdale film devoted exclusively to the Cuban concert, Havana Moon (Eagle Rock, 2016). And while that obvious companion piece to Ole Ole Ole! may appear to be just another round of Rolling Stones 'product' becoming available during the course of 2016, following the archive release of Totally Stripped (Eagle Rock, 2016), the return to roots of the first studio recording in ten years Blue & Lonesome (UME/Interscope, 2016) and the memorabilia display Exhibitionism, the group's been far more active on multiple fronts that anyone might've guessed less than a decade ago when Keith Richards' autobiography Life (Little Brown, 2010) rent asunder his friendship with Mick Jagger.

But, as offered in one of the two complete performance clips shown as coda to the film itself, a close hearing of "Out of Control" from Bridges to Babylon, (Rolling Stones Records, 1997) might illuminate its significance as a regular inclusion in the setlist and as it applies to this vigorous self-renewal of the Rolling Stones, off stage and on (footage here from shows at each stop of the tour depict them consistently energized); the lyrics leap out knowingly from those famous big lips of the lead singer suggesting what the band's doing now is just a logical extension of what's they always done, albeit on a much larger scale: "I was vain/I was charming/I was lucky/Tell me how have I changed."

As his ever-so-weathered comrade and songwriting partner comments during a tour of a hotel room as disheveled as he is, "Ole Ole Ole!" is indeed an expression of mutual loyalty.