Rolling Stones From the Vault: Live at Leeds Roundhay Park 1982

By DOUG COLLETTE
January 22, 2016
Sign in to view read count 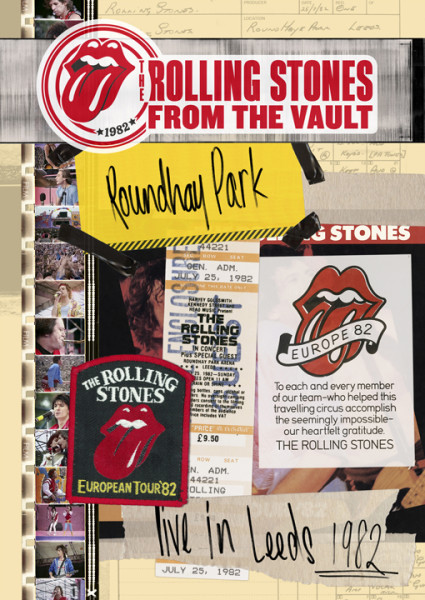 Since they began to suck in the Seventies, the Rolling Stones have turned the concept of a band hiatus into an effective modus operandi for consistent rediscovery. And that, in turn, has presented an opportunity they've maximized with a increasingly high-tech stage production that presents perfect fodder for their archiving series. The steady stream of From the Vault releases ultimately represents a tribute to the Stones foresight in anticipating so far in advance the demand for such product, the generally stellar quality of which is commensurate with that demand.

This mid-summer open-air appearance was the final show of a near year long period on the road supporting )em>Tattoo You (Rolling Stones Records, 1981). (while not exactly a collection of outtakes the album was not all newly recorded material either). The comparatively hurried sequence of events involving the record's release and the subsequent touring nevertheless carried long-term significance for the Stones: it marks the first roadwork on which former Allman Brother circa 1973-1975 Chuck Leavell participated and. as it turned out. the last on which appeared long-time band confidante and boogie piano master Ian Stewart (he died in 1965, roughly halfway toward the Stones' next round of live shows in 1989).

Credit Jagger, Richards and co for weaving plenty of recently recorded material such as "When the Whip Comes Down" (where the lead vocalist plays guitar) and the bluesy "Black Limousine" into a song sequence otherwise well-seasoned with the vintage likes of "Under My Thumb:" the strains of Chuck Berry permeate the raucous guitars of Keith Richards and Ron Wood on the original material as well as the rootsy likes of Eddie Cochran's "Twenty Flight Rock."

ADVERTISEMENT
And while Jagger's vocals sometime sound strained as he's constantly dancing and gesticulating during up-tempo numbers, (in later years, he would allow elevated production values their due and more often remind what a great singer he is), the homage to the Temptations in the form of "Just My Imagination" is as heartfelt as the debt he continues to pays to Otis Redding with the chestnut that is "Time Is on My Side." If crowd response sounds muted, then, equal kudos go to the producers for not over-inflating it in the mix and a frontman who occasionally exhorts the audience, but never panders to them.

The narrowly repetitive pattern of camera shots during Live at Leeds Roundhay Park seems even more so during the extended "You Can't Always Get What You Want," featuring as it does a protracted slide solo from Wood and a couple similar sax spotlights from Gene Barge (a veteran of Chicago's music scene in the Sixties inside and out of the very chess Studios where they recorded 12 x 5 in 1964 ). Still, the growing momentum of crowd-pleasing numbers in the home stretch of the uninterrupted two-hours plus single set, ranging from "Tumbling Dice" to "Jumpin' Jack Flash" and "(I Can't Get No) Satisfaction" effectively offsets the somewhat static nature of the video.

Given the fact the entire show takes place in daylight, it's arguable more panoramic stage shots of the whole band, even interspersed with more views of the 100,000 plus crowd, would ratchet the intensity further. Even as such a perspective would capture the gigantic exotically-decorated scrims decorating the stage. the focus of Live at Leeds would still gravitate toward the Rolling Stones, a tribute to their own fundamental commitment to performance as a truly great rock and roll band.